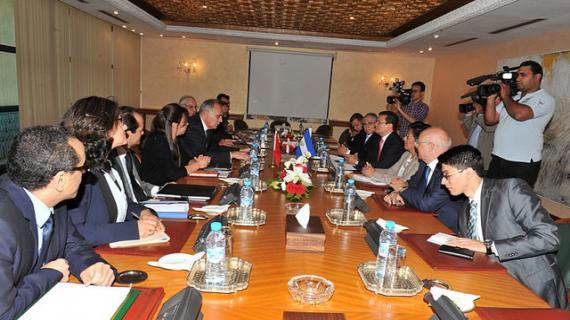 El Salvador praised "the serious and credible efforts" made by Morocco since 2007 to reach a negotiated solution to the Sahara issue, said a joint statement released on Thursday on the occasion of the visit that El Salvador’s foreign minister Hugo Martinez is paying to Morocco (April 27-29).

During the 1st political consultations between the two countries, held in Rabat, Morocco’s minister of Foreign Affairs and Cooperation Salaheddine Mezouar informed his Salvadoran counterpart of the latest developments of the regional dispute over the Sahara, the statement added.

Martinez "reiterated the stance of his country urging the parties to continue to work in good faith to reach a lasting, mutually acceptable political solution to the Sahara issue in accordance with the principles and objectives of the UN Charter," according to the same source.

"In this regard, Mr. Hugo Martinez hailed the serious and credible efforts made by Morocco since 2007, to reach a negotiated solution to this dispute," the statement pointed out.

During their 1st political consultations, the two countries praised the “open and constructive” dialogue between Morocco and El Salvador, reaffirming their will to work together to further enhance bilateral exchanges.

The two ministers also welcomed the convergence of views on the situation in their respective regions and stressed the need of respecting the states’ sovereignty and territorial integrity.