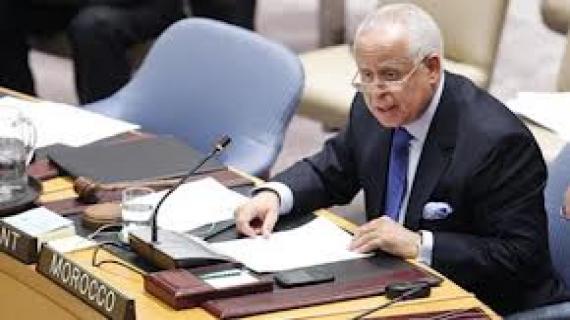 Diplomatic sources acquainted with the issue of the Sahara told MWN on Monday in New York “there are positive signs indicating that the draft resolution proposed by the United States won’t be adopted as it was at first version”, adding that the members of the Security Council are keen on keeping the same consensus that marked the resolutions adopted in recent years on the issue.

The same source who attended the briefing presented by the UNSG Personal Envoy to the Sahara, Christopher Ross, to the 15-council members, added that the atmosphere of briefing was rather positive and none of the council members mentioned the question of the human rights monitoring mechanism in the Sahara suggested in the first draft resolution presented by the United States.

He went on to say that the members of the council praised the progress accomplished by Morocco in terms of human rights in recent years.

The UN personal envoy to the Sahara on Monday morning briefed the Security Council on his latest trip to the region from March 20 to April 3, as well as on the main recommendations of the UN Secretary report on the situation concerning the Western Sahara.

Asked by MWN, a French diplomat said that the draft resolution has not been circulated yet to other members of the Security Council, which indicates that negotiations are still underway on the final version of the text, which will be based on consensus, he added.

On Sunday Spanish Foreign Minister José Manuel García-Margallo said that Spain expects “a new U.S. resolution” to renew the mandate of the UN mission in the Sahara and “could get the consensus” of the members of the Group of Friends of the Sahara.

He went o say that the new U.S. proposal “has not been accepted by two members of this group,” which “makes it difficult to adopt, knowing that the rule in the group is consensus.”

The Council is scheduled to adopt a new resolution on the Sahara on Thursday.