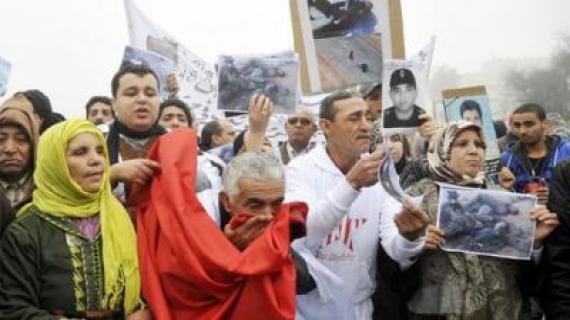 Families of the lynching victims of Gdeim Izik will have to wait another week to see justice done, as the trial of the 24 detainees arrested in relation to the atrocities committed after the dismantlement of the Gdeim Izik camp has been postponed until February the 8th, pursuant to the defendants’ request.

Widows and orphans have gathered on Friday in front of the Military Tribunal of Rabat, holding pictures of their lost ones and hoping to see an end to their ordeal. The judge, however, postponed the trial to enable key witnesses called for by the defense attorney to appear on the stand, including the then Minister of interior Mr. Mohamed Etaib El Cherkaoui, a precedent in Moroccan legal history.

On November 8th, 2010, an attempt to arrest thugs who had taken control over the Gdeim Izik camp spiraled into an all-out confrontation with Polisario activists. The fact that the security forces were given strict orders not to use excessive force made them an easy target to the very thugs they were after. The whole world watched the horrific scenes of men’s throats being slit and their bodies mutilated. 11 men in uniform died and no civilian casualty was recorded.

While the postponement of the trial came as bad news to the victims’ families, the gravity of the accusations and the complexity of issue dictate that all measures be taken to ensure a fair trial to the alleged perpetrators.