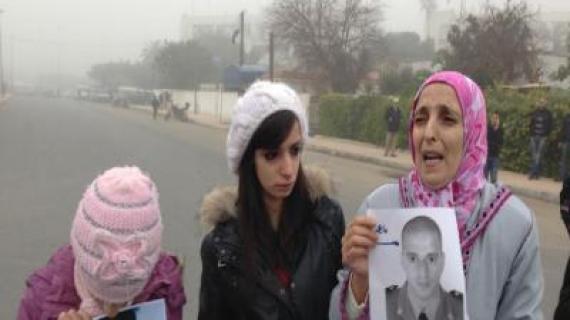 The families of the victims of Gdim Izik events, which occurred during and after the dismantling of a protest camp near Morocco's southern Saharan city of Laayoune, in November 2010, called for a fair trial and "justice for the victims".

“We don't want an eye for an eye...What we want is justice to be provided for the victims, in accordance with the rules and the due process of law,” Ahmed Atartour, the Coordinator For Families and Friends of the Victims of the Gdim Izik Events (CofaV), said at a press conference, held in Rabat on Friday evening at the premises of Morocco's OMDH independent body.

The press conference was held as the trial of a group of defendants prosecuted in connection with the events in the Gdim Izik camp opened at the military court in Rabat.

Twenty-four people were arrested as a result of their involvement in the events that date back to November 2010. The defendants respond to acts related to the formation of gangs and the death of police officers and mutilation of the dead bodies.

During the press conference, Atartour expressed the families’ disappointment at the delay in the judicial investigation and the legal proceedings of this case. “This delay has drawn a veil on the barbarism which stood out during the events and the atrocities that accompanied the martyrdom of our children who were only discharging their duties”, he said.

"This demand for justice, even if it does not assuage the sufferings of the parents, the children and the friends our our felled offspring, will make it possible for us to grieve conveniently, understand what happened and, above all, to do them justice and punish their executioners", he underlined.

He also called on the international human rights NGOs and the relevant UN mechanisms to take action “both in the interest of a fair trial and to ensure justice for our loves ones (children, brothers and fathers) assassinated during the peaceful dismantling of the Gdim Izik camp”.

On October 10, 2010, residents of Laayoune drew a tent camp in Gdim Izik to claim social demands. Moroccan authorities initiated a dialogue and then presented a series of steps to respond to these demands gradually. Unfortunately, the dialogue did not result in ending the situation on the ground. Moroccan authorities then decided to peacefully dismantle the camp.

The camp was under total control of criminals and traffickers who held part of the population against their will and started to present a real threat to the public order.

Subsequently, clashes broke out in the city of Laayoune where infrastructure and public property were burned and private property was looted, officials said. Those attacks caused 11 deaths among security forces and seriously injured 70, they added. Those events have also caused extensive damage to public buildings and property and private property.

Parliament had set up a fact-finding commission, while several Moroccan NGOs and international human rights organizations had gone to the scene to conduct their investigations.