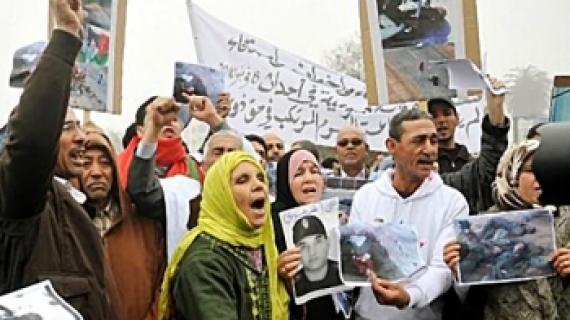 The families of the victims of Gdim Izik events, which occurred during and after the dismantling of a protest camp near the southern city of Laayoune in 2010, refuted today what they described as “baseless” allegations of relatives of those who were involved in violence and bloodshed.

Twenty-four people were arrested and will appear before a court of justice on Friday as a result of their involvement in the events that date back to November 2010. The defendants respond to acts related to the formation of gangs and the death of police officers and mutilation of the dead bodies.

“Security forces have not used weapons during the dismantling of Gdim Izik camp, unlike the extremist elements who have used knives and sticks”, Youssef Bougataya, brother of Yassin Bougataya who was murdered in these events told art19.com.

Bougataya made this statement as the military court in Rabat resumes, Friday, the trial of a group of defendants prosecuted in connection with the events in the Gdim Izik camp.

“I have a video that clearly demonstrates the sequestration of security elements by extremist criminals, which led the security services to intervene to liberate their comrades”, he noted.

For his part, Brahim Tourahi, father of Badreeddine, who died in these events, strongly condemned “the barbarism and atrocities which accompanied the martyrdom of our children who were performing their duty, adding that only a far trial could do justice to our murdered relatives during the peaceful dismantling of the Gdim Izik camp”.

The families of the victims of Gdim Izik called, last week, for justice for the victims. “We want justice to be provided for the victims, in accordance with the rules and the due process of law,” Coordinator For Families and Friends of the Victims of the Gdim Izik Events (CofaV), Ahmed Atartour, said.

“This demand for justice, even if it does not assuage the sufferings of the parents, the children and the friends our felled offspring, will make it possible for us to grieve conveniently, understand what happened and, above all, to do them justice and punish their executioners”, he added.

On October 10, 2010, residents of Laayoune drew a tent camp in Gdim Izik to claim social demands. Moroccan authorities initiated a dialogue and then presented a series of steps to respond to these demands gradually. But the dialogue did not result in ending the situation on the ground. Moroccan authorities then decided to peacefully dismantle the camp.

Parliament had set up a fact-finding commission, while several Moroccan NGOs and international human rights organizations had gone to the scene to conduct their investigations.