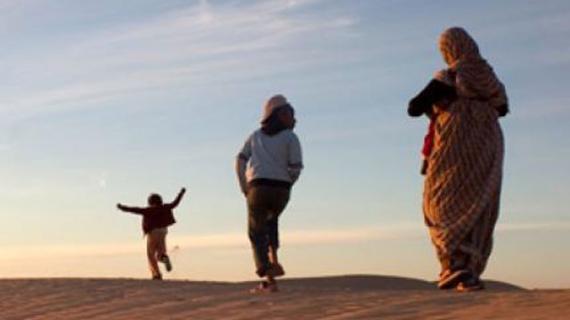 A controversial documentary film that exposes slavery in the Western Sahara camps controlled by the Polisario front has been screened in Morocco’s coastal resort city of Agadir.

The film, directed by Violeta Ayala and Daniel Fallshaw, had faced difficulties obtaining screening permission because of the sensitivity of its subject for the Moroccan government.

The film exposes modern-day slavery in the refugee camps run by the Polisario front in Tindouf, Algeria through telling the story of a Sahrawi girl called Fatim Sellami, herself a slave, who was reunited with her mother after 35 years of separation with the help of the United Nations.

The Polisario front is seeking the independence of Western Sahara from Morocco.

The film, which also tackles several cases other than Fatim’s, was not initially meant to deal with slavery. Ayala and Fallshaw wanted to make a documentary on the living conditions in the Tindouf camps, but when they arrived there, they found out about the slave trade and decided to shift focus.

The film shows that those Sahrawi girls offered for sale are persecuted and are frequently beaten. Their names are also changed and they are not allowed to marry except with the permission of their masters who have to provide them with a document stating that they have been granted freedom.

Both Ayala and Fallshaw were arrested by the Polisario and were only released after the Australian Embassy in Paris negotiated with the Algerian government. The arrest came after several attempts on the part of Polisario officials to stop the filming.

When they realized they were being hounded, Ayala and Fallshaw hid the tapes in the desert in the hope that someone will help in smuggling them outside the camp.

Ayala and Fallshaw also accused Moroccan authorities of stealing the tapes they filmed in the Western Saharan city of Layoun, which witnessed violent clashes between Moroccan security forces and secessionist Sahrawi activists.

The directors said the tapes had mysteriously disappeared from their hotel in the Moroccan capital Rabat and pledged to film the sequel in Morocco.

Mohamed Réda Taoujni, head of the Moroccan Sahara Association and one of the most prominent advocates of Western Sahara’s Moroccan-ness, slammed the documentary which he said was undermining the “national cause.”

“How could this movie be screened in Morocco under the pretext of exposing slavery practices in Tindouf while it actually depicts life in the camp as a happy one and then focuses on the dark side of Morocco,” he said in a speech that followed the screening.

According to the film, Taoujni was the one who smuggled the tapes to Europe after they had reached Mauritania in what he considered an implication that he works for Moroccan intelligence.