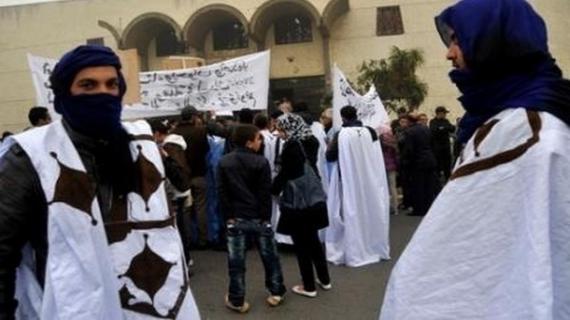 Rabat Military Tribunal decided to continue on Monday the hearing of the accused over the dismantling of the camp Gdeim Izik, following a request from the defence.

At the hearing session held on Sunday, the defense presented another petition to allow the accused to have a rest, a request that the court acceded in accordance with Article 95 of the Code of Military Justice.

At this meeting, which lasted more than eight hours, with intervals of rest, the Military Court continued the hearing in question, which dismissed all charges against them.

The military court has so far interviewed 10 of the 24 defendants prosecuted in connection with the case, including one granted bail for the "constitution of criminal gangs, violence on the forces that led to the death with premeditation and mutilation of corpses. "

The trial, which began on February 1, 2013 is taking place in the presence of the media, national and international observers, several associations and human rights NGOs.

In order to ensure the conditions for a fair trial, the court will ensure the translation of all phases of the trial through a permanent presence of sworn translators in French, English and Spanish.

Alongside the trial, the families of victims and accused of organizing peaceful sit-in in front of the courthouse.

The Gdeim Izik events, dating back to October-November 2010, saw 11 deaths among security forces, including  Emergency Preparedness, 70 injured ,these forces  had several seriously injured and four injured civilians, in addition to substantial damage against public buildings and private property