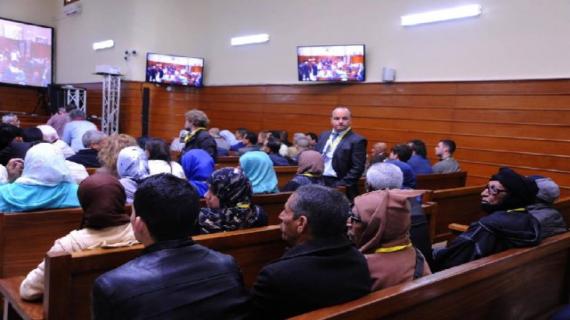 Daki stated that arguments were initiated by a member of the defense, highlighting in his first argument the general context in which the Gdim Izik events took place, and the main roles assigned to some of the defendants.

During the last session of the hearing, according to Daki, testimony of the doctors who wrote the medical reports evaluating a number of the defendants was introduced in accordance with the requirements of Article 345 of the Criminal Procedure Code.

He stated that the forensic medical specialist who coordinated the medical committee entrusted with the completion of the medical reports Fadila Ait Boughima had testified that the Committee had fulfilled its obligation and completed its work in accordance with the specific international criteria, particularly the Istanbul Protocol, required for the completion of medical evaluations upon allegations of torture and ill-treatment.

As explained by Daki, the Istanbul Protocol requires the expert to determine the correlation between the alleged methods of torture and the traces found on the body of the person being examined, but., the expert cannot offer absolute conclusions.

The Crown Prosecutor pointed out that, after the expert had answered a number of questions addressed to her by the President of the Court and the defense counsel for the defendants, and counsel for the civil rights claimants, to clarify several points contained in the medical reports, the Court decided to close its investigation of the matter.

Daki explained that some of the defendants in the case refused once again to attend the court session. As a result, the court decided again to adopt the provisions of Article 423 of the Code of Criminal Procedure, and continued to try the case in their absence.

The court registrar will went to the room for the detainees in the Court to read the minutes of the proceedings, but the defendants, “as usual,” according to the prosecutor, interrupted him chanting slogans.

“The court proceedings were attended by relatives of the accused, the victims, observers, Moroccan and foreign observers, as well as various national and international media platforms,” ??the prosecutor said.

In the Gdim Izik trial, twenty-five people are being prosecuted for alleged crimes relating to the tragic events that took place on Nov. 8, 2010 in the village of Gdim Izik, during which 13 individuals were brutally murdered, including 11 police officers and one firefighter, as Moroccan security forces dismantled a camp in which people had been living in protest of unemployment and lack of opportunities in the city of Laayoune. Seventy people were injured and public property was destroyed.