Gdeim Izik Trial: Bundles of dinars and swords among the exhibits 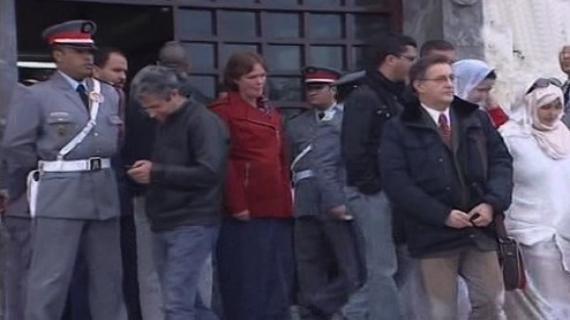 At the Royal Armed Forces permanent military court the trial of 24 suspected assassins at Gdeim Izik continues, the exhibits and, the record of investigation of the case were exhibited.

Before the judge, the prosecutor and the defence counsel, international observers, victims' families and the community of Moroccan and foreign supporters for the Polisario separatists, as it was required by the defence of the alleged perpetrators were exposed to the pieces of incriminating evidence, during the trial.

Swords, daggers, mobile phones and bundles of currencies including Algerian Dinars, Euros and U.S. Dollars, found by police services in the possession of the accused at the time of their arrests after the violence of 8 November 2010 at Gdeim Izik.

The murder weapons and the means of logistical support (mobile phones) and financial (money Algerian dinar and foreign currency), offered to the alledged perpetrators of the Gdeim Izik killings have been brought to light, the Algerian regime's involvement in this large destabilisation, which had been tried without success,by the Polisario separatistsin the southern provinces that year.

In addition, sources on the spot said that the 24 accused, heard by the judge, have repeated the same statements, speeches with the politicised apology theses separatists called their crimes, epics and a high expressions of activism, " to serve as a model for all activists in the world. "

The same sources reported that foreign observers did not hide their support for the 24 suspected assassins and had, as a provocative gesture, declined translation service offered by the court, and had appealed to the separatists for translators for their reports on the progress of the trial.