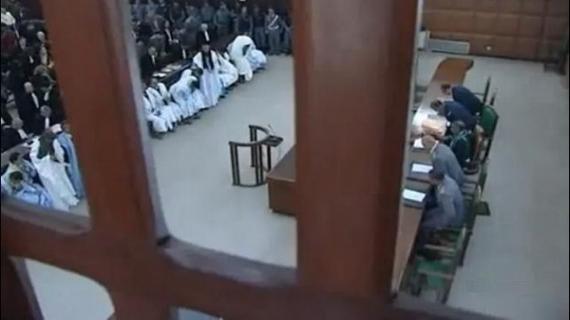 The military court in Rabat completed on Friday night,th examination of the case of the 24 accused in the events related to the dismantling of Gdeim Izik in Laayoune.

The court will hear on Saturday, the last word of the accused before returning the matter under advisement.

Throughout the day  on Friday, the court heard arguments from the defense requested the acquittal of all the accused for lack of evidence against him, no criminal intent, and absence of elements of crime and described the minutes of the Judicial Police void of "copies" of each other and flawed by contradictions.

24 implicated in this case, one is in a state of bail, charged with "constitution of criminal gangs, violence against law enforcement causing death with intent to give and mutilation of corpses."

In its response to the arguments of the defense, the representative of the Crown insisted on the validity and legality of the minutes of the police, stating that the elements of the crime are met, including the presence of a detailed plan,  instruments of crime, funds and place of crime. He also presented a series of photographs of persons prosecuted in military uniform, with the leaders of the so-called "Polisario".

The public prosecutor has also conducted the projection images broadcast by a Spanish television channel of Palestinian children victims of a massacre committed by Israeli forces and presented as images of Gdeim Izik to mislead the public.

For his part , the defense argued that the photos in question with officials from the so-called "Polisario", presented by the prosecution, are "the real reason for the prosecution" to which they are subject, adding that the arguments of the latter are "baseless."

The defence also listed the vices that plagued the investigation and preparation of the case, knowing that the prosecution had previously stated that any challenge to the decisions of the judge was to be at the Appeals Chamber at the Court Call of Laayoune.

Alongside the trial, activists organized on Friday before the military court in Rabat, a sit-in in solidarity with the families of victims of the events of Gdeim Izik, whose trial began on February 1 current.

Armed with the portraits of the victims, all members of the security forces, waving flags and national colorus, dozens of people gathered outside the courthouse where they chanted slogans calling for justice to the memory of martyrs of national duty and reaffirming their mobilisation for the defense of national unity.

The sit-in was marked by the participation of several leaders of national political parties and activists of human rights.

The Gdeim Izik events, dating back to October-November 2010, saw 11 deaths among security forces, including the  Emergency Preparedness, 70 of these forces were injured, many seriously and four injured civilians, in addition to property damage and consequential damage to public buildings and private property.