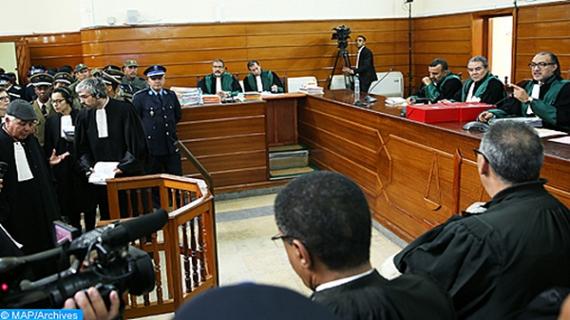 Regional commander of the Royal Gendarmerie of Laayoune (M.B) revealed, in his testimony before the Salé Appeal Court in the trial of the accused in the Gdim Izik events, which will resume on June 5th, serious facts about the settlement of the camp and the discovery, after its dismantling, of sums of money in national currency, in Euro and Dollar and in Algerian Dinar.

After being sworn in, the witness, who was the field coordinator responsible for evacuating the camp, revealed serious facts, mentioned for the first time in this trial, on the setting up in 2010 of the Gdim Izik camp by the accused Zaoui and Bourial, who chose a location near the region of Dcheira, located 13 km from Laayoune.

He noted that the defendants had set up the nucleus of the camp before the public forces intervened to dismantle it, noting that this camp was rebuilt again by the same defendants, in addition to Enaama Al Assfari, Eddich Dafi and Mohamed M'barek Lafkiret, immediately after their return from Algeria.

The witness, a colonel at the Royal Gendarmerie, presented to the Court and the defense of the accused and the civil parties as well as their families, data on the circumstances of the events in the camp, transformed by the accused into a "battlefield", and on the number of participants.

He also reported on the execution of disarmed law enforcement officers, who were fatally beaten by 4X4 vehicles, noting that the accused also used gas cylinders, knifes and truncheons.

The regional commander of the Royal Gendarmerie also revealed the circumstances of the arrest of the accused Enaama Al Assfari, who is considered the main defendant in this case, noting that his arrest allowed the discovery of knifes and sums of money in national currency and foreign currency, including the Euro, the Dollar and the Algerian Dinar, hidden inside his tent.

He added that the said accused, who acknowledged the acts alleged against him, registered his name in the minutes and signed it, while the others put their fingerprints by boasting about the charges against them.

The witness confirmed the violent attacks on members of the security forces, noting that security officials were given strict instructions not to resort to violence against the camp residents.

He also said that the drafters of the minutes provided the accused with all the legal guarantees, under the supervision of the competent public prosecutor's office.

For their part, the drafters of the minutes noted, at their hearing, that they had recognized certain accused involved in inciting violence against members of the security forces.

The prosecutor's office delivered last Thursday to the Salé Appeal Court new exhibits confirming the preliminary planning by many accused, in coordination with foreign parties, of the setting up of the camp.

The exhibits include recordings of telephone conversations between certain defendants and leaders of the "polisario front" that were carried out before the camp's events in 2010, under the supervision of the public prosecutor's office in Laayoune.

These recordings contained in the minutes of judicial police include information and instructions that the accused received from foreign parties on how to set up the camp, to manage it, to supervise it, to communicate with the local authorities and to raise the ceiling of the social demands that led to the setting up of the camp, with the aim of not reaching an agreement with the authorities.