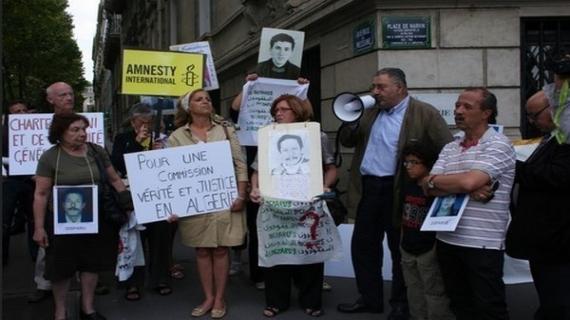 Algerian border police (PAF) again prevented Hacene Ferhati member of SOS Missing, leaving Algerian territory to attend the World Social Forum in Tunis, it was learned on  Wednesday from the Collective of Families of the Disappeared in Algeria (CFDA ).

In a statement, the CFDA fiercely condemns the systematic harassment of the activist for human rights and demands that his freedom of movement is respected.

Faced with the impossibility of crossing the border by land among the 96 activists who wanted to go to the World Social Forum in Tunis, Hacene Ferhati returned to Algiers on the night in the hope of being able to fly to Tunis. PAF at Houari Boumedienne airport however prevented his departure without providing an acceptable explanation as he tried to board a flight to Tunis Tuesday, 26 March.  He  presented himself again at the airport and the police officers once again refused to let him leave Algerian territory by telling him to go to the DGSN to solve his problem, press reports said.

The CFDA added that because of his activism for human rights and freedoms in Algeria, Ferhati suffered long repression and was targeted by authorities. This new violation of his rights shows a deliberate government  effort to counteract the Algerian players in  Algerian civil society and to try to stifle the claims of human rights, especially those working on the issue of enforced disappearances, the NGO regretted.

The CFDA and SOS Missing believe this arbitrary decision aims to isolate and weaken civil society and called on Algerian authorities to immediately lift the ban on Hacene Ferhati leaving the territory and all activists blocked  at the Algerian border and enforce their fundamental freedoms of movement, assembly and association, guaranteed by the International Covenant on Civil and Political Rights ratified by Algeria.

For their part, the parliamentary party of the Socialist Forces Front (FFS-opposition), participating in the Parliamentary Forum held in Tunis from 27 to 30 March and other activities of the World Social Forum, who attended the delivery Hacene of Ferhati, vigorously denounced this blatant and unacceptable new action against freedom of movement.

In this event (FSM), which honors the Maghreb, the authorities of our countries have already distinguished by an attitude of another age, banning dozens of young Algerian and Algerian join this Forum Dignity, parliamentarians complained in a statement issued in Algiers.