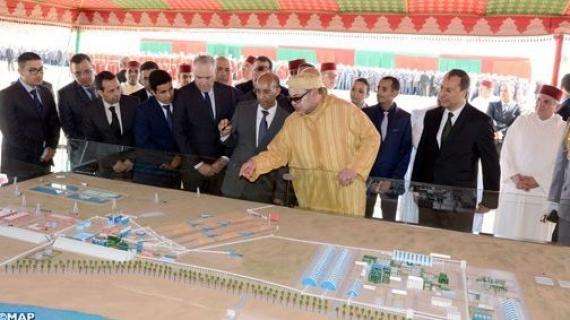 In order to adapt to maritime, meteorological and characteristics of the coasts of Laayoune (silting), and to develop logistics capabilities (import and export), it is also planned to build a new port (wharf), for a budget of 4.2 billion dirhams.

On this occasion, HM King Mohammed VI laid the foundation stone of the washing and flotation plant, a major component of the future integrated industrial complex of fertilizer production.

This plant, with a processing capacity of 3 million tons / year, will tap new phosphate layers at the mining area of Boucraâ and optimize mineable deposits.

The plant will include various components, notably two washing lines with a capacity of 400 t / hour, a flotation unit, two sludge decanters and a breakwater for slurry spreading and water recovery.

The construction of these projects will be done in full respect of the environment.