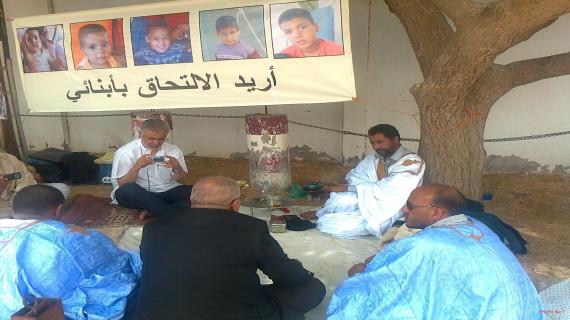 The Independent Commission for the Defense of Human Rights tip Sahara solidarity with the exiled political activist from the Tindouf camps Mustapha Salma Ould Sidi Mouloud after waging in an open hunger strike since 72 hours so far in hopes of pressuring the Polisario leadership to come back among the bosom of his sons.

Following the decision to open-ended strike for the food that Atkhaddh Mustapha Salma Ould Sidi Mouloud refugee Mauritania registered with the Office of the High Commissioner for Refugee Aid under the number: 00002908-371 to protest against the persistence of the Algerian state and the leaders of the Polisario in insisting on remove him from his children who are refugee camps Sahrawis on the Algerian territory in defiance of international laws related to the protection of the family, especially those relating to Article 16 of the Universal Declaration of Human Rights, and in conflict with clear principle VI of the Convention on the Rights of the Child, which recognizes the need upbringing under the auspices of his parents in under the responsibility of, and given to ignore the Office of Refugee Aid to the calls of Mustapha Salma and not to enable of the demands of family and legitimate reluctance of the Mauritanian government in Temtaah the right to get a passport in line with the text of international conventions in this regard, the Commission decided the Independent Defence of Human Rights Sahara Tak all measures of solidarity possible with Mustapha Salma Ould Sidi Mouloud to lift the injustice of it and recover their rights usurped and beyond the situation is humanitarian experienced, which is in a series of crimes committed by the Polisario against refugees who are supposed to benefit from international protection, where a case of Mustafa born Nmudja of gross violations of human rights perpetrated by the Polisario on the Algerian territory, against the refugees isolated since the seventies of the last century, away from eyes of the world.

Accordingly, the Independent Commission for the Defense of Human Rights Sahara declares its solidarity unconditional with Mustapha Salma Ould Sidi Mouloud and draws an urgent appeal to the United Nations and international human rights organizations in order to stand by his side in support of the legitimate demands and to freedom of opinion and the right to a normal life as well as his sons.

Translated by: Polisario: Threat in the Desert .