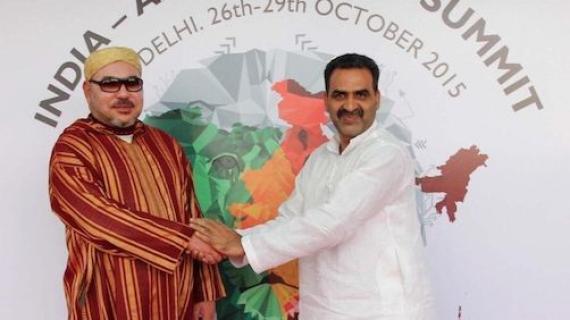 The Western Sahara issue continues to oppose Morocco and Algeria at the international level, as shown by the latest confrontation at the India-Africa summit currently underway in New Delhi.

The summit organizers turned down the African Union’s request to invite the Polisario separatist front to the summit since its Sahrawi Republic (SADR) is not recognized by the UN.

This argument irked the African Union which had fought hard to have the SADR attend the India-Africa summit, opened in New Delhi on October 26.

But it was clear that the AU’s efforts will be in vain, because the Indian government would have never put at stake Morocco’s participation in the summit. Morocco, a key political and economic player in the African scene, is actually represented at the summit by King Mohammed VI.

After this new snub, the African organization should question the reality of this SADR, whose presence on the international scene is almost inexistent.

As a matter of fact, several member states of the AU have called for freezing the SADR membership within the African organization because they consider this membership as a mistake. And for reason, the self-proclaimed SADR has no existence on the ground. It was created out of nothing by Boumediene’s Algeria and Muammar Gaddafi’s Libya, at the height of the Cold War in the 70s, before it was imposed on the African organization few years later.

The new setback suffered in New Delhi by Algeria and its African allies which support the Polisario Front reveals, if need be, the international opposition to the Front.

An opposition that was also translated at the level of the UN Congress this week. The Foreign Affairs Committee of the Congress, actually recommended the US administration to support the Morocco-proposed autonomy plan to reach a final settlement of the Western Sahara issue.

The autonomy plan presented by Morocco to the UN in 2007 provides for granting the Western Sahara region extended powers and jurisdictions to allow the local population to manage its own affairs, in full respect of its cultural specificities.

Several major capitals have supported the autonomy plan, while the UN Security Council called it a serious and credible basis for a settlement of the Western Sahara conflict.