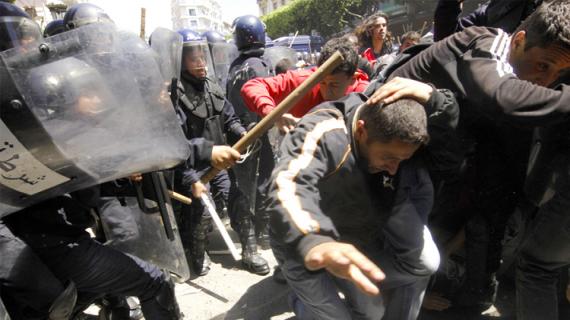 Algiers - activists, trade unionists and Algerian journalists have experienced one of the worst years of their lives in 2013, their most basic rights have been violated and flouted by the authorities in a country where the human rights situation defies evaluation independent, as international NGOs are banned.

The year just ended was also one of the popular protest that turned repeatedly, the drama with the proliferation of suicide attempts and self-immolation of desperate protesters. Almost daily protests in Algiers and elsewhere credo claim socio-economic base, headed employment and decent housing. many of these demonstrations were violently suppressed, particularly in Algiers, where the authorities prohibit gatherings of any kind.

For example, a sit-in was dispersed striking teachers so muscular, beginning last October, and participants were victims of targeted arrests before their arrival at the rally. To believe Eric Goldstein, Deputy Director MENA at Human Rights Watch (HRW), Algeria is “the only North African country that routinely blocks visits NGOs defending human rights, while the latter go freely and regularly in Egypt, Libya, Tunisia, Morocco. “ Local organizations have not waived the rule rather than censorship. Last November, the Algerian Association for the Fight against Corruption (AACC) was prevented from participating in a UN conference on corruption in Panama City, because of a “veto” opposed by the Algerian government.

In Furthermore, Algeria continued to reject requests long under the Special Procedures of the Council of Human Rights of the United Nations relating to visits by Special Rapporteurs on torture, the protection of human rights and fundamental freedoms while countering terrorism, and on extrajudicial, summary or arbitrary executions and the Working Group on Enforced or Involuntary Disappearances -. Indicted for a drawing ever published - Grave precedent the annals of endless attacks on freedom of the press, the cartoonist Djamel Ghanem, who works for a local newspaper, was sued by his employer for a drawing ever published evoking “the disease of the head of state.”

The Caricaturist was charged on the basis of a complaint of his newspaper The Voice of Oran “breach of trust, attempt to harm the company and against the person of the President,” based on “a corpus delicti which is actually non-existent from the point of view of the law “, as one commentator has explained. Djamel Ghanem The case had occurred just after the blogger Abdelghani Alaoui, sued after the publication of his account Facebook photomontages and caricatures of the head of state and the Prime Minister. Defending young Algerian blogger, imprisoned since 15 September, announced the intention to enter the Council of Human Rights (CHR) the UN and the development of a memorandum at the UN Special Rapporteur on the promotion and protection of the right to freedom of opinion and expression. Both approaches aim to “condemn Algeria for violating human rights and violation of freedom of expression.”

While demanding the immediate release of Abdelghani Alaoui and cancellation of all charges against him The organization Amnesty International insurgent against the power of Algiers, stressing that “the Algerian authorities seem to be trying to stifle criticism in this period of uncertainty before the presidential elections next year.” Between the two cases, the journalist Rabah Benamghar was sentenced for defamation of a local politician, what had been “a significant threat to the freedom of information,” Reporters Without Borders (RSF) has urged the authorities of that country to “reform the text on the status of journalists.” Exasperated also by their social status, journalists balked against the lack of consideration for their economic rights. Some have observed strikes, others threatened to imitate their peers.

In Algeria, journalists perceive the private sector, the end of each month, the small sums that do not allow them to cope with the rising cost of living.According to several independent reports which stigmatize the professional and material situation in the private sector, journalists called independent press earn an average salary of not more than 300 euros. - Independent Unions asphyxiated - A picture of freedom of expression and battered muzzling the independent press, freedom of association were not better off in 2013. ”The Algerian authorities should stop putting barriers to the creation of independent trade unions and the organization and participation in peaceful demonstrations and labor strikes,” Human Rights Watch demanded.

International advocacy organization human rights was indeed denounced the “barriers to the creation of independent trade unions” and the organization of “peaceful demonstrations” in Algeria. According to HRW, the authorities blocked events, arbitrarily arrested and prosecuted some union activists of them criminally for the peaceful exercise of their trade union activities. They returned after officials in peaceful strikes and union leaders jailed for politically motivated charges. ”Algerian authorities are engaged in administrative maneuvers to deny legal status to some independent unions,” HRW lamented, explaining that ” the law governing the legalization of new unions only requires that these groups notify the authorities of their existence, and not that they seek permission to build. “ Human Rights Watch noted, on the basis of testimony of twenty union that these practices have created “a climate of intimidation and fear preventing independent unions develop in parallel state-sponsored unions that already exist.”

For example, the international organization cites the refusal issue a registration receipt to the Union of Higher Education Teachers Solidarity and National Autonomous Union of Postal Workers (SNAP). said Joe Stork, acting director of the Middle East and North Africa director at Human Rights Watch, “the workers should not risk being fired or thrown in jail for taking part in peaceful trade union activities. “ - Punishment activists - In the same vein, activists of human rights have been sentenced to imprisonment in a case dating back to March, when activists from the town of Ghardaia had demonstrated in denouncing the waste public funds. Responsible Local Algerian League for the Defence of Human Rights (LADDH), Kamel Eddine Fekhar, has sentenced a year in prison, while his 15 companions were each sentenced to 6 months in prison following the incidents that marred the opening of the 46th edition of the Festival mat Ghardaia, March 26. activists were assured that they were victims “beatings, torture, and d arrests blatantly racist manner during a peaceful sit-in in solidarity with the unemployed and their legitimate claims. “

Reacting to his conviction, Kamel Eddine Fekhar stressed that these sentences “heavy” confirm “grotesque accusations instigated as usually by the police of Ghardaia, “noting that the verdict shows the intention to” punish humanitarian activists, the unemployed, the self unionists and anyone who dares to claim their rights or to oppose power. “ ”Another time, we urge all organizations of human rights non-governmental, especially the High Commissioner for Human Rights, the opening of a thorough investigation of the exceedances of the Algerian judiciary during treatment records of humanitarian activists, independent trade unionists and unemployed, “he told the activist Laddh. - The police singled out - the same region of Ghardaia will end the year on new charges of human rights violations, as a result of communal clashes between Mozabites Berber and Arabic Chaambis. After clashes November 22 in the town of Guerrara, 130 km from Ghardaia, capital of the province, the Algerian League for the Defence of Human Rights (LADDH) accused the police of outrageous attitude and bias, stigmatizing “the targeting Mozabites in stop while the destruction of private property, in addition to public goods, has particularly affected.” ”The scandalous behavior of some police officers that either during the conflict (obscene gestures, behavior and racist, etc..) or during the arrest of Algerians Mozabites (throw cold water on detainees, forcing them to undress, forcing them to mimic obscene attitudes ) suggest that the Algerian police behave like American occupation forces in Iraq, particularly in the Abu Ghraib prison “was the high Laddh.

During the resurgence of the communal conflict in a few days the end of the year, this time in the town of Ghardaia, citizens have once again accused the police of “torture” and “repression”, fully supported by the Algerian League for the Defence of Human Version Rights. Against this background, the Laddh released a statement denouncing “outrageous actions of police services intended to represent a republican institution,” noting that “the primary responsibility of the state is the protection of persons and property in accordance with the laws of the Republic “responsibility which that State has failed on all records throughout the past year.

Other articles of interest:

Mbarka Bouaida: Morocco is not criticism on issues of human rights

HRW: The Algeria, the only country in North Africa to block NGO visits

Algeria has she ‘bought’ his election to the Council of Human Rights of the UN?