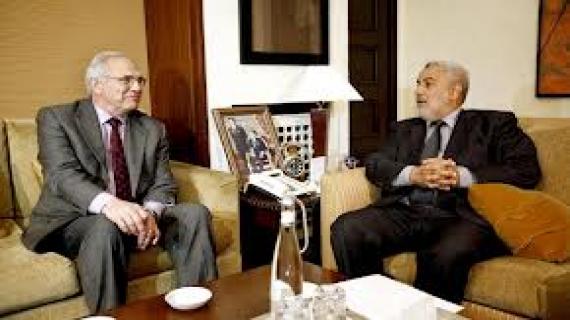 Christopher Ross began a visit to Morocco. The Personal Envoy of the Secretary General of the UN for the Sahara was received by Abdelilah Benkirane and other political personalities.

The head of government, Abdelilah Benkirane was  Rabat, an interview with Christopher Ross.

During the interview, Mr. Benkirane and Ross reviewed the latest developments in the region marked by the rise of instability in the Sahel region, a situation that makes increasingly necessary to find a settlement to the conflict regarding artificial southern provinces of Morocco, a statement from the Presidency of the Government.said.

"The prime minister recalled, in this regard, the many initiatives taken by Morocco, under the wise leadership of His Majesty King Mohammed VI, to reach a  realistic political solution ultimately accepted by all parties on the basis of the Moroccan autonomy proposal, in full respect of the sovereignty and territorial integrity of the Kingdom of Morocco, "the statement added.

Mr Benkirane reiterated Morocco's commitment, seriously and in good faith inaccordance with  international law and UN efforts to break the deadlock and end the status quo, and the disposal of the Kingdom of Morocco to cooperate with the Secretary General of the UN, to achieve the final solutioninline with  the last call of the Security Council resolutions.

Mr Benkirane has also expressed the commitment of Morocco to contribute to the building of the great Arab Maghreb and ensure the security, stability and well-being of the peoples of the region.

Ghellab welcomed, the source added, the efforts of Mr. Ross during its visits to the region, renewing the commitment of Morocco to the process of negotiations under the auspices of the United UN to achieve a final settlement of the regional conflict.

The President of the House of Representatives has also attracted the attention of Mr. Ross on many issues, including the need to work to ensure the freedom of movement of Sahrawi Moroccans sequestered in Tindouf camps.

In turn, adds the statement, the UN official stressed that the current security situation in the Sahel region is "very disturbing and dangerous" threatening stability in the entire region, adding that the situation requires efforts by all to achieve a solution to the Sahara dispute.

Mr. Ross has also reviewed the results of his recent tour in many world capitals, noting that its mission is essentially to find a consensus between all parties to reach a political settlement to the conflict in accordance with resolutions Security Council.