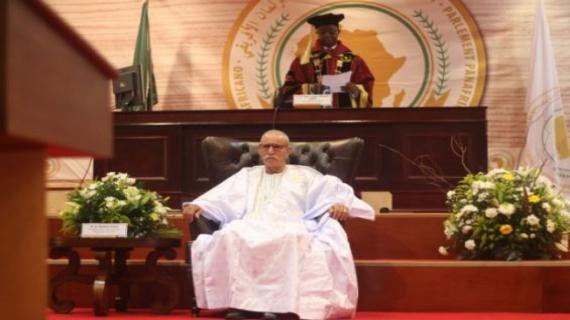 South Africa is once again trying to assist the Polisario’s leadership. In August, the country showed support for the Front in a statement delivered before the South African Development Community countries, while in September it managed to mention the Western Sahara conflict during a BRICS’ conference. Yesterday and during the 5th ordinary session of the Pan-African Parliament, Pretoria imposed Brahim Ghali as a guest of honor.

Once again, South Africa is committed to back the leadership of the Polisario Front. It succeeded in imposing Brahim Ghali as a guest of honor on the fifth ordinary session of the Pan-African Parliament organized in Johannesburg from the 9th to the 20th of October.

Ghali arrived yesterday in South Africa. Once in the airport, he immediately held a press briefing during which he repeated the same sentences in front of journalists. Meanwhile, Pretoria offered an unexpected forum for the leader of the Front to express his opinion on the conflict of Western Sahara in front of more than 270 African MPs, especially that the territorial dispute is no more a priority for the international community.

This is confirmed by the delay of appointing Horst Kohler as the new personal envoy of the UN Secretary General to the Sahara. The decision was announced only one month before the briefing held by the German diplomat in front of the Security Council.

South Africa and its support for the Front

On the 20th of August in Johannesburg, South Africa convinced the fifteen members of the Southern African Development Community (SADC) to adopt a recommendation that supports the Front. The states expressed in a communiqué «their deep concern regarding the cessation of the decolonization process on the African continent in Western Sahara».

Three weeks later in Xiamen, China and during a BRICS summit, a conference attended by the heads of government of the five member states Brazil, Russia, India, China, and South Africa, the latter succeeded into including the Western Sahara conflict in the final declaration of the meeting. «We support efforts made to resolve problems in the Democratic Republic of the Congo, Libya, South Africa, Somalia, the Central African Republic and Western Sahara in a comprehensive manner,» the statement said.

Thanks to the support of Jacob Zuma, a South African politician and a former president of the same country, Ghali can afford returning to the Tindouf Camps without being arrested. The Polisario’s leader is wanted in Spain as in November 2016 a warrant of arrest was issued against him for committing «genocide and crimes against humanity».