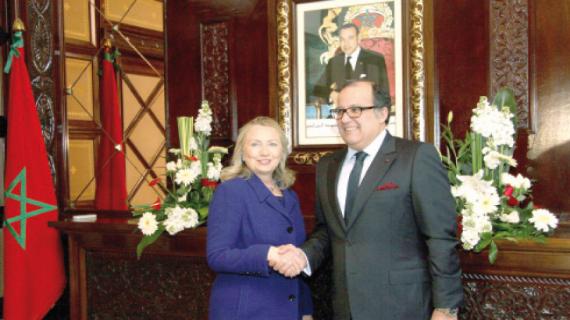 The MINURSO crisis revealed the unexplained and unjustified absence , misunderstood by the world of the Abdelilah Benkirane government, from the diplomatic filed of combat that had to deliver Morocco.

Jeune Afrique, the weekly French-Pan African magazine, highlighted the important and "critical" role of the adviser of King Mohammed VI, and former Foreign Minister, Taib Fassi Fihri, in the withdrawal of the proposal by the U.S.to include a mechanism to monitor human rights in MINURSO’s mandate.

In its latest edition, Jeune Afrique published a post-analysis of the very devastating and all too brief crisis that pitted the two Atlantist allies, Rabat and Washington.

Under the title 'Fassi Fihri, the return', The French publication focused on the mode of action that Morocco adopted  to achieve this turnaround, which attempted to respect the American ally and which could have ended very badly for the kingdom.

The main conclusion stated by the French magazine : The erasing of the government from management at this different level.

"The success Rabat  achieved in its battle against the American project has highlighted the absence of the government and the minor role of Islamist Foreign Minister Saad El Dine Otmani" analysed Jeune Afrique.

Someone close to the Royal Palace, quoted by the publication in its 'Confidential' column said that "Contrary to popular belief, nothing and no one prevented the head of government Abdelilah Benkirane and his Minister of Foreign Affairs, to take  their responsibilities and go to the UN to argue the Moroccan cause."

The source from the palace was surprised, according to Jeune Afrique, by the fact that the head of government " chose to attend at the same time a meeting  in Nouakchott of the Moroccan-Mauritanian Joint Committee", while his chief of diplomacy Saad Dine El Otmani was "absorbed by the game of questions and answers in Parliament."