King Mohammed VI on Friday called for making a radical break with the manner in which the so-called Western Sahara issues have been dealt with so far.

After years of sacrifice and political and development-oriented efforts, Morocco has reached maturity, the King underlined, adding that conditions are now ripe for the dawn of a new era in the process to consolidate national unity and achieve full integration of our southern provinces into the motherland.

The implementation of the Development Model for the Southern Provinces and the application of advanced regionalization are part of that process, the Monarch pointed out.

“I am keen to make sure we provide our fellow citizens in the southern provinces with all the necessary means to enable them to manage their own affairs and show they are capable of developing their region”, the Sovereign said, recalling that the kingdom has made sure the inhabitants of those provinces enjoy a free and dignified life.

“From time immemorial, the Saharan populations have been known as scholars and seasoned tradespeople. They have always earned their living by the sweat of their brow and lived with dignity and pride. They do not expect assistance from anyone, despite their harsh living conditions,” the King said.

“I am talking about the true Sahrawis, the genuine patriots who have remained committed to the bond of allegiance which has always existed between their forefathers and Moroccan monarchs”.

However, the Monarch affirmed that as “for the few people who are get carried away by the views of our enemies and who champion them, there is no place for them among us. However, the homeland is most forgiving and magnanimous towards those who come to their senses and repent.” 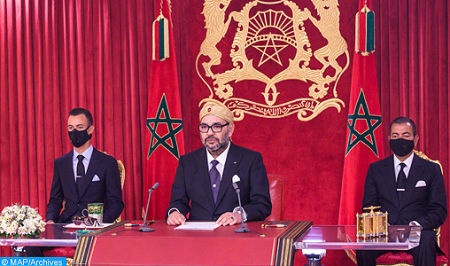 HM the King: Morocco Will Not be Affected by Useless Provocations and Desperate schemes of Other Parties
08 November 2020