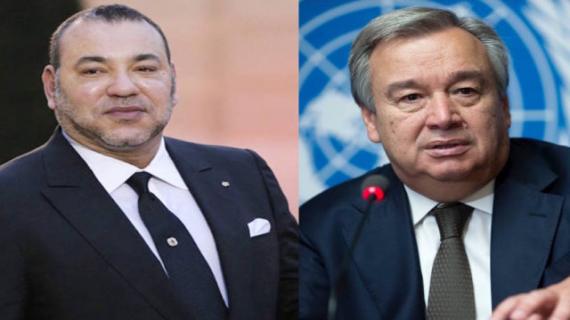 King Moahmmed VI has called on the Secretary General of the United Nations, Antonio Guterres to take “the urgent and necessary measures” to put an end to the unacceptable situation the Guergarate border crossing that seriously threatens the UN-brokerd ceasefire and jeopardizes stability in the region.

During the phone call, King Mohammed VI drew Guterres’s attention to the serious situation in the Guergarate region as a result of the repeated incursions by armed elements of the polisario and their provocative acts.

These acts were premeditatedly produced one month before the return of Morocco to the African Union with the aim to create discord and try, unsuccessfully, to derail this process, a communiqué from the royal cabinet said.

In accordance with King Mohammed VI’s instructions, “the Ministries of Foreign Affairs and the Interior, as well as the General Inspection of the Royal Armed Forces, had repeatedly reported these acts to MINURSO and the United Nations,” the statement added.