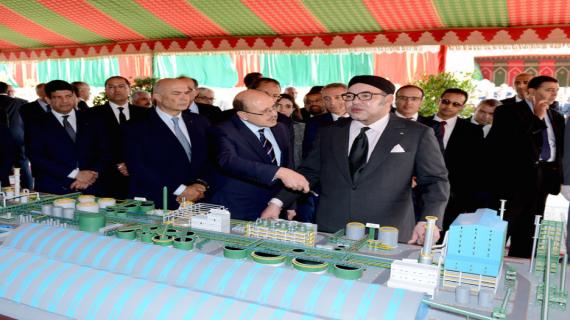 King Mohammed VI arrived Thursday night in Laayoune, the main town in the Western Sahara region, on a second visit in three months.

This visit is mainly devoted to the launch of the new development model for the southern provinces of the kingdom, the aim being to eventually make of these provinces a bridge between North Africa, West Africa and the countries of the Sahel.

The Moroccan sovereign’s agenda includes the launch of a series of structural development projects likely to enhance the local potential.

Overall, Morocco is projecting in the region an investment program worth more than €7 billion by 2022.

On Friday, King Mohammed VI launched the construction works of the Foum El Oued – Laayoune Technology Park and of an integrated fertilizer production complex in the Phosboucraâ phosphate site.

The first project is a city of knowledge and innovation that will create 1,200 permanent jobs by 2022. The city will include a polytechnic university, a high school of excellence and an industrial center of competence. This project was designed to accompany the Phosboucraâ fertilizer production complex.

The various institutions of the technology park will supply engineers, managers, technicians and other staff to the new industrial units of the OCP Group. They will also contribute to the promotion of innovation and industrial and technological development of Phosboucraâ, its ecosystem and also that of OCP’s African partners.

Phosboucraâ will process phosphates locally, a fact that will improve the competitiveness of the region. The main goal however remains the development of the fabric of SMEs and SMIs, and the promotion of new professions associated with phosphate processing activities.

The platform extends over 36 hectares.