King Mohammed VI: Moroccans Ready to Make All Sacrifices for Sake of their Territorial Integrity 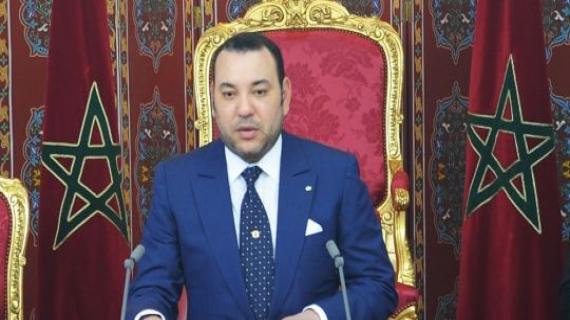 King Mohammed VI stressed that Moroccans were ready to make all sacrifices for the sake of their territorial integrity amid hopeless attempts by Morocco’s foes to undermine its reputation and sovereignty during a speech to mark the 38th anniversary of the Green March.

Referring to the Western Sahara issue, the sovereign said that the Moroccan people have an unwavering unanimity over their territorial integrity for which they are mobilized and ready to make all sacrifices. “In fact, the Sahara issue is every Moroccan’s cause with no exception. It is everyone’s duty.”

The monarch went on to say that Morocco has no problem responding positively to the legitimate aspirations of its citizens, wherever they are.

He pointed to the fact that national institutions and regional bodies for the protection and the promotion of human rights have been set up. “These mechanisms are known for their independence and credibility according to related international standards, in parallel to the role played by political parties, NGOs and media outlets,” Mohammed VI said.

The King said that, despite hopeless attempts by Morocco’s foes to undermine its reputation and sovereignty, the Kingdom will continue its cooperation with the UNSC, his personal envoy and sister nations. “Our goal is finding a final political solution to the artificial conflict over our territorial integrity, within the framework of our autonomy initiative which has been recognized for its seriousness, credibility and realistic spirit,” the sovereign added.

King Mohammed VI underlined the ultimate goal of seeing the Moroccan citizens honored as they deserve to be and enjoying full citizenship.

“It is in this spirit that we have undertaken a series of in-depth reforms and large-scale projects, according to a gradual approach that takes account of national specificities,” the sovereign said.

Morocco is committed to positive and interactive cooperation with international human rights bodies which are unbiased in dealing with issues and accept constructive criticism. However, Morocco refuses that some organizations, in reports written beforehand, use some isolated incidents to attempt to undermine its image or trivialize its human rights and development achievements, the King stressed.

On the model of regional development for the southern provinces which was submitted by the economic, social and environment council, the sovereign underlined the will to complete and implement it.

“This is neither a simple proposal of palliative emergency solutions, nor isolated projects disconnected from each other, but rather an integrated developmental vision, based on an objective analysis of the current situation in our southern provinces, with the aim of laying the bases for a long-term integrated policy in the different sectors,” King Mohammed VI stressed.

Economically, this model provides for investment megaprojects to spur economic growth, create wealth and jobs and encourage social, solidarity-based economy. This approach is part of a sustainable development dynamic that takes into consideration the protection of the environment and the preservation of the rights of future generation, mainly by putting emphasis on renewable energy, the monarch said.

Socially, this model relies on a new policy based on solidarity, equity, the preservation of the dignity of the underprivileged, the promotion of human development and the strengthening of social cohesion, the sovereign went on, saying that culturally, this model is aimed at ensuring the promotion of cultures and local specificities, mirroring the status of the Hassani culture in the constitution, one of the Moroccan identity’s components. “This is can be achievable through the integration of this culture in school curricula, upgrading the architecture heritage and boosting the region’s artistic creation.”

He also said that the goal behind this is to turn the southern provinces into an area of integrated development, capable of ensuring a decent life for the populations.

Concerning the African continent, the Monarch said that Morocco has been attached, since the independence, to fostering a fruitful cooperation and active solidarity with African countries and contributing to giving concrete substance to the expectations of their peoples who aspire to development and stability.

”We urge the government to reinforce the means of coordination and cooperation with these brotherly countries in the different areas, particularly for the conclusion of free trade agreements in the prospect of achieving regional economic integration,” the sovereign underscored.

Morocco has repeatedly reaffirmed the pressing need to face security threats in the Sahel and the Sahara region which has become a hotbed for extremist and terrorist groups, and drug, human and arm trafficking, with all the disastrous consequences they have on the region’s development and stability, he noted.

On the issue of the growing number of immigrants from Africa and Europe, “we called on the government to elaborate a new comprehensive policy on immigration and asylum issues, pursuant to a humanitarian approach in conformity with our country’s international commitments and respectful of immigrants’ rights,” he said.

Morocco’s credibility in terms of human rights is confirmed by how this initiative was welcomed by parties that are directly concerned by the problem, in addition to brotherly sub-Saharan countries, the European Union and UN bodies involved in the migratory phenomenon and human rights, the Monarch underlined, adding that, to bolster this orientation, Morocco had submitted, on the sidelines of the UNGA this year, the “African alliance for migration and development” initiative.

This initiative is based on a shared African vision and humanitarian principles that should govern migration matters. It is also based on shared responsibility between origin, transit and host countries, and on the close link between immigration and development, King Mohammed VI said.

Because the migration issue concerns all states and peoples, Mohammed VI urged the international community to get involved in this issue to avert humanitarian catastrophes it generates as the tragedy that recently occurred on the coast of Italian island Lampedusa.