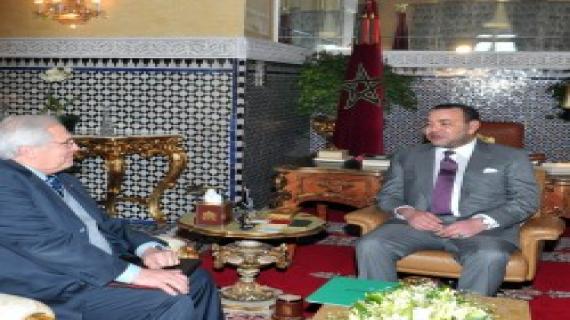 King Mohammed VI received, Wednesday at the Royal Palace in Fez, Christopher Ross, Personal Envoy of the UN Secretary-General for the Sahara.

“The audience, the Royal Cabinet said in a statement, comes as part of renewed efforts of the Personal Envoy, after the assurances and clarifications confirmed to His Majesty King by Ban Ki Moon, UN Secretary-General, during the telephone conversation of 25 August 2012, in particular on the nature of his mandate and the negotiation parameters which confirm, in particular, the pre-eminence of the Moroccan Initiative for broad autonomy for the Sahara, presented by the Kingdom in 2007.”

“During the audience, the statement added, HM the King reiterated Morocco’s full cooperation with UN efforts and reaffirmed the commitment of the Kingdom to move forward in research of a just and realistic solution, on this basis. It is in this context that the autonomy plan proposed by the Kingdom is an open and credible solution likely to put an end to this conflict which causes decades of separation.”

In this regard, the King recalled during these talks that the other parties must also show a similar spirit of compromise and openness.

The King also emphasized the important work being undertaken by the Moroccan Economic, Social and Environmental Council on the economic development model in the Sahara. This work will form the cornerstone for implementing effectively and efficiently the already initiated process of advanced regionalization, particularly in the southern provinces.

King Mohammed VI reiterated the continued commitment of Morocco to strengthening friendship and good neighborly relations with Algeria, and to the construction of a new Maghreb capable of meeting the multiple challenges and threats facing the region.

The statement said that the King and the Personal Envoy of the Secretary-General “exchanged views on the risks run by the entire Sahel-Sahara region in view of the worsening security threats.”

“The unresolved Sahara conflict can compound these threats, hindering in particular effective cooperation between the states of the region,” the statement concluded.