King Mohammed VI: We Will Turn Sahara Into a Hub for Trade Between Africa and Europe 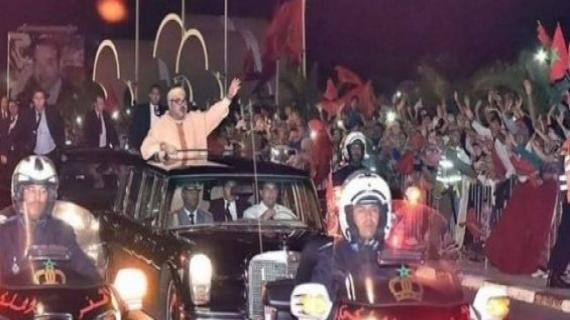 Marrakech – “We are keen to turn the Moroccan Sahara into a hub for trade and human interaction between Africa and Europe,” King Mohammed VI said in a message to the participants in the 1st African Congress on maintenance, preservation of road assets and technical innovation, which kicked off on Wednesday in Rabat.

“We will also build the Great Atlantic Port in Dakhla and consider a railway line from Tangiers to Lagouira in order to connect Morocco to African sister nations,” he added in this message, which was read out by the King’s Advisor Abdellatif Menouni.

The monarch recalled the launching of a series of integrated projects to further link the Kingdom’s North with the South as part of the celebrations to mark the fortieth anniversary of the Green March for the recovery of Morocco’s Southern Provinces, noting that these projects include the planned freeway, which complies with international standards and specifications, and which will link Agadir and Dakhla, via Tiznit and Laayun, all the way to the Mauritanian border in the South.

In addition to the quantum leap made in the development and modernization of Morocco’s road network, a strategic plan for the next 20 years has been developed in which great importance is attached to road asset preservation, the King pointed out.

“Consistent with our integrated vision, this plan gives special importance to strategic connections with West Africa. The Moroccan southern provinces will thus constitute a bridge between Morocco and its African roots. Moreover, the construction of the Maghreb freeway, to the East, will continue in order to facilitate trade with neighboring countries,” the monarch underlined.

He went to add that these ambitious plans, together with major infrastructure and solar and wind energy projects, are not designed only for the development of the region. “Through them, we hope to create closer bonds with African sister nations and contribute to their development as well,” he explained.