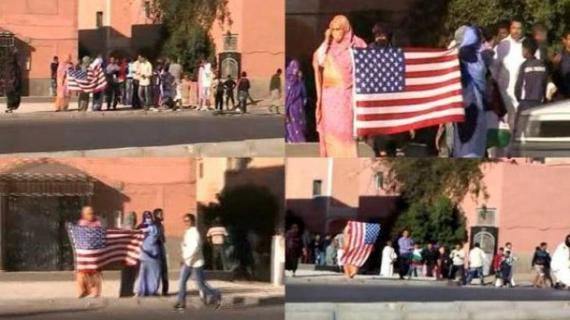 Sources from Laayoune said that Aminatou Haidar, the leader of the separatists, spread American flags to her followers and asked them to raise these flags alongside the Polisario ones during demonstrations , as is shown in the pictures taken from streets of Laayoune.

The incorporation of the American flag in these demonstrations serves as a visual message from Aminatou to her friend Kerry Kennedy, thanking her for her support.

Aminatou is trying to play on both the European and American fronts to win some support for her agenda and the fabricated scenarios regarding the violations of human rights in the Sahara.

The objective of this new accessory is to provoke members of the police forces into catching or burning it, and subsequently film them in action, with the ultimate goal of showing that Moroccan police forces do not respect the American flag.  This in turn would be used as an attempt to spoil the deep-rooted relations between the US and Morocco.

At this critical juncture, Moroccan police should use restraint and act with clairvoyance so as to not provide the Polisairo with a weapon that could potentially be used against Morocco.