Laayoune: local actors confirm to Ross that autonomy initiative is the only solution to Sahara issue 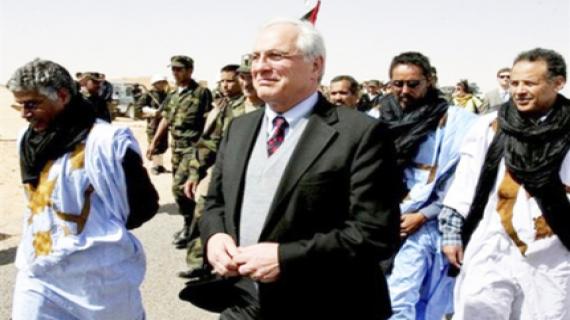 Actors from the Laâyoune-Boujdour-Sakia El Hamra region confirmed, on Saturday in a meeting with UNSG personal envoy for the Sahara Christopher Ross, that the autonomy initiative for the southern provinces, under the national sovereignty, is the only solution and ideal way to settle this issue.

In statements to the press after the meeting, attended by region’s wali Khalil Dkhil, elected members and chiefs of tribes informed the UN emissary of Sahrawis’ satisfaction with this proposal to whose elaboration they contributed through the royal advisory council for Saharan affairs and as sheikhs of identification operation.

President of Laâyoune-Boujdour-Sakia El Hamra region Sidi Hamdi Ould Errachid said that the project of autonomy, as a true major project, is feasible and will ensure a dignified life for local people and enable them to manage their own affairs.

This proposal stems from the conviction by the Sahrawis of the unbreakable bonds of allegiance to the Alawite throne, he said, stressing the national consensus over the initiative and the territorial integrity of the Kingdom.

Hamdi Ould Errachid, one of the sheikhs of the identification process, said that the participants informed Ross, in their capacity as elected and legitimate representatives of the people of the southern provinces, of their attachment to the autonomy initiative, noting that the Sahrawis believe that is it guarantees safety and peace, including for population held captive in the camps of Tindouf.