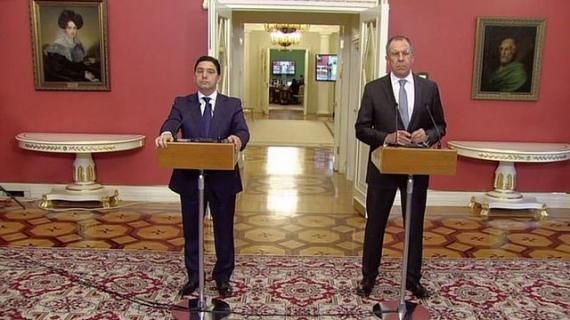 An estimated two million Moroccans, including a number of politicians, rallied on Sunday against UN Secretary General Ban Ki-moon’s perceived bias in previous remarks labeling Morocco’s relation to Western Sahara as an "occupation."

"We believe that the UN, despite the recent misunderstanding, I hope will continue to play a constructive equidistant role and seek to find solutions that will take into account the interests of all stakeholders and to ensure a balance of these interests," Lavrov told reporters.

He underlined that a number of pathways toward settling the self-determination dispute in Western Sahara exist through UN Security Council resolutions and the UN Mission for the Referendum in Western Sahara (MINURSO) that includes Russian military observers.

"We expressed the hope that the leadership of Morocco will continue to assist the security personnel of the mission," Lavrov stressed after a meeting with Moroccan leadership in Moscow.

Ban clarified through his spokesperson on Monday the misunderstanding over his use of the word "occupation" related to a "personal reaction to the deplorable humanitarian conditions in which the Sahrawi refugees have lived in for far too long." The UN chief made the remarks the Moroccans deemed inflammatory after visiting the Algerian town of Tindouf where refugee camps housing the Sahrawi people are located.

The UN has been attempting to negotiate a lasting political solution for the Western Sahara crisis that would provide for the self-determination of the people of Western Sahara, after Morocco claimed control of most of the former Spanish colony in the mid-to-late 1970s.