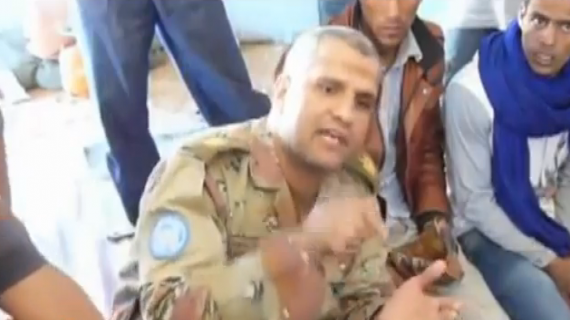 An Egyptian member of the MINURSO appears in a video taking side with the Polisario and telling a group of Pro-Polisario activists that the “Sahara is their and they have to exploit any means at their disposal to prove the righteousness of their position”.

This position has to be exploited, this territory is your s and nobody should take it away from you”, says the member of the MINURSO in a blatant violation of the neutrality that any UN member must observe when taking part in a UN mission.

This video comes to reinforce the suspicion of the Moroccan authorities regarding the impartiality of this UN mission and explains why Rabat flatly rejects that the later includes a human rights monitoring mechanism as called for by the Polisario and its backers, chief of which Algeria and South Africa, as well as a number of so-called human rights activist.

By taking sides with the Polisario the Egyptian peacekeeper violates one of the three basic principles of UN Peacekeeping Missions, which is impartiality.

According to the UN Peacekeeping rules of engagement “Impartiality is crucial to maintaining the consent and cooperation of the main parties, but should not be confused with neutrality or inactivity. United Nations peacekeepers should be impartial in their dealings with the parties to the conflict, but not neutral in the execution of their mandate.”

“Notwithstanding the need to establish and maintain good relations with the parties, a peacekeeping operation must scrupulously avoid activities that might compromise its image of impartiality. A mission should not shy away from a rigorous application of the principle of impartiality for fear of misinterpretation or retaliation,” reads the website of the UN Peacekeeping Missions.

“Failure to do so may undermine the peacekeeping operation’s credibility and legitimacy, and may lead to a withdrawal of consent for its presence by one or more of the parties,” it adds.