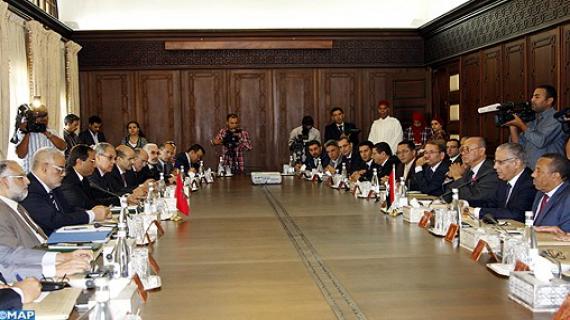 Aware of the historical context of the Sahara issue and the negative role by the former regime and its instrumentalization of the issue, the Libyan party reaffirms its support for UN's efforts to find a negotiated, consensual and final political settlement to the Sahara issue which is an obstacle to the revitalization of a common Maghreb action, said the statement.

The two sides stressed the need to eliminate the barriers that hamper the reviving of the bodies and institutions of the Arab Maghreb Union (AMU), which is "an irreversible choice, an economic priority and security need to guarantee the emergence of a new Maghreb order based on integration and complementarity between the five countries, as advocated by HM King Mohammed VI," it said. The two sides expressed their satisfaction with the restructuring of the Community of Sahel-Saharan States to meet the pressing needs of its members in order to make it a real area for dialogue and solidarity. The objective is to support the efforts of development and consolidate peace and security in the Sahel-Saharan region, the joint statement added.