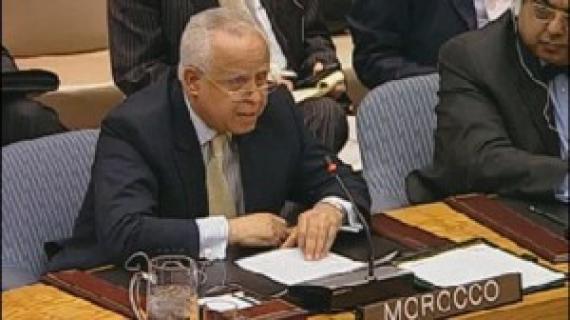 Morocco welcomed Friday at the UN headquarters in New York, the “overwhelming support” of African countries to the “Moroccan autonomy initiative” for the Sahara and was pleased that this compromise “was envisaged in the settlement “other conflicts in the continent.

Morocco’s ambassador to the UN, Mohamed Loulichki, who was speaking before the UN 4th Committee expressed  the “gratitude” of Morocco “to many delegations, particularly in Africa, which again lent their support to this initiative,” while welcoming that “this compromise solution proved its relevance in our neighborhood was envisaged to open up real prospects for the settlement  of other conflict situations in the continent and elsewhere.”

Morocco’s commitment to “settle the dispute quickly and definitively is matched by its commitment to revive the dream of Maghreb Union, to turn it into reality immunize our region against the real threats posed by terrorism and destabilization “said the ambassador in his speech during the general debate of the Commission.

By offering its “autonomy initiative, Morocco showed its attachment to the path of compromise. It is now incumbent upon the other parties to show their compromise” instead of remaining frozen in the same unwillingness to maintain the status quo.

“We cannot stand idly while a part of the African continent is gradually sliding into insecurity and instability. Instability is contagious. It requires identifying the real issues and tackling the real challenges instead of just watching them with resignation ad to apprehension “he noted.

“We know and recent examples have proven and demonstrated that separatist movements are permeable to the terrorist threat. Nobody can accept the existence of a permanent home instability and everyone must take responsibility, “said the diplomat.

“A common vision for the future of our region requires us to cooperate to address issues relating to peace and security that we face,” he said.

The Fourth Committee is due to adopt its annual resolution on the question of the Sahara early next week. Like the previous years, it is expected to see member States adopt this resolution without a vote. The resolution is expected to support negotiations initiated by Security Council resolution 1754 (2007) and renew its call on the parties of the dispute to continue to show political will and work in an atmosphere propitious for dialogue, in order to enter into a more intensive phase of negotiations, in good faith and without preconditions, taking note of efforts and developments since 2006 in order to reach a just , long-lasting and mutually acceptable solution to the conflict.