As the Dakhla-Oued Eddahab region is progressively becoming a large tourist attraction, its president, Yanja El-Khattat, announced on Saturday the introduction of a regional development plan worth MAD 17.7 billion.

The plan has been put in place to take advantage of the potential for economic growth in the southern region.

The development plan seeks to strengthen infrastructure, develop new projects, stimulate the economy, expand on human resources, and promote agricultural growth. Of the MAD 17.7 billion allocated for the plan, 6.6 billion will be covered by the State.

“The region enjoys an undeniable geostrategic position, giving it the status of the kingdom’s gateway to Africa,” said El-Khattat.

Adopted in 2017, the plan is currently at 30% completion, as reported by the daily newspaper Aujourd’hui le Maroc in its February edition.

The development plan of the Dakhla-Oued Eddahab region aims to launch seven programs, two of which include the construction of the Dakhla Atlantic port (for which the amount of investment amounted to MAD 6 billion) and the construction of a seawater desalination plant for agricultural purposes (with a capacity of 100,000 m3 per day, and with the purpose of connecting the city of Dakhla to the national network of electricity).

During a two-day meeting with the Spanish press to promote the region, El-Khattat indicated that Dakhla, in particular, is constantly developing its fishing sector.

Dakhla’s coastal wealth makes it an important asset for both the local and international markets. “With its fishery resources, the Dakhla-Oued Eddahab region offers 600,000 tons of fish a year, with a profit of 6 MAD billion. The importance of this sector is also reflected in the creation of 35,000 direct and indirect jobs,” the region’s president said.

The region is also seeking to enhance its touristic appeal. A partnership agreement was signed between the North-South Action Association, the Regional Tourism Council, and the Spanish Radio Turismo when was this signed? for the first time. The goal is to promote f the city of Dakhla in Spain.

The Regional Director of Tourism, Daïf Allah Endour explained that, “We welcome a lot of tourists from Northern and Central Europe who come in big numbers to practice water sports,” and that the city is also capitalizing on the sports to attract more tourists. 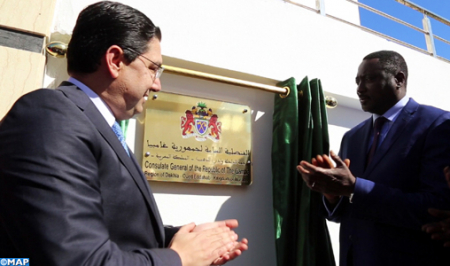