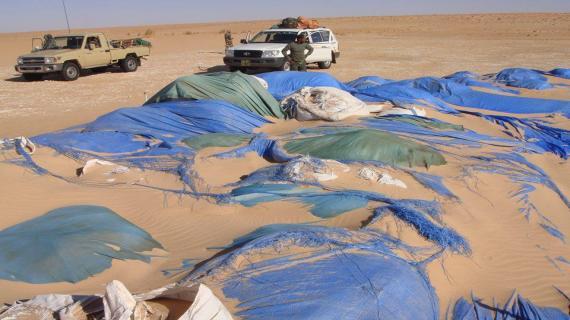 Mauritanian security forces arrested 36 people during a raid against the biggest network of drug smuggling in Mauritania and Greater Sahara. It also confiscated four cars and three tons of highly dangerous drugs.

Mauritanian sources said that the operation was conducted between Nouadhibou, Tirs Zemmour and Inchiri, not far from the place where Spanish tourists were kidnapped at the road between Nouakchott and Nouadhibou. According to Mauritanian security forces, the seized cars are of the model “Nissan Petrol” carrying car plaque numbers peculiar to Polizario Front, yet local press mentions traffickers from Tindof Camps, Algeria and South America, mainly a Venezuelan who has been under custody since his arrest in December.

Some sources indicate that this Venezuelan citizen has disclosed information and data regarding drug shipment and trafficking methods from Columbia via Mauritania and Senegal; he also narrated the story of his departure with a drug plane from Senegal to Columbia to board close to Kidal in north of Mali and its burning there in 2009.