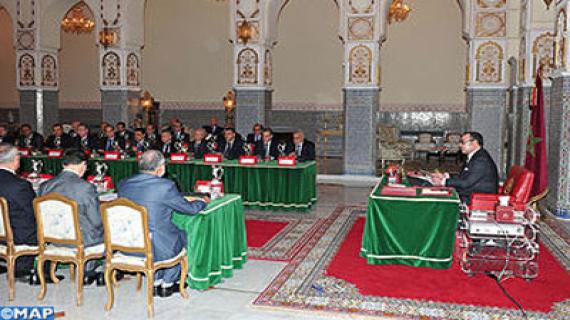 The meeting was devoted to the “latest developments in the National Question at the United Nations, and especially initiatives aimed at distorting the mandate of MINURSO,” the statement said.

It added that the meeting was an opportunity to reiterate the national consensus on the consistent position of Morocco to categorically reject such initiatives, insisting that while the Kingdom’s efforts in promoting human rights across the country – including in the southern provinces – are hailed by the international community and by many international partners, the partiality of this type of unilateral approaches, taken without prior consultation, in terms of content, context and method, can only create misunderstanding and rejection.

The participants in the meeting expressed their concern about the consequences of such an approach on the ongoing negotiation process, as it deliberately breaks with the spirit of consensus that has always underlain the search for a just, lasting and mutually acceptable solution to this artificial regional dispute, on the basis of realism and a spirit of compromise urged by the UN Security Council.

“Since the Kingdom of Morocco presented, in April 2007, the Initiative for Negotiating an Autonomy Statute for the Sahara Region, the issue of human rights has been methodically exploited by the other parties to the dispute in an attempt to derail the negotiation process and use it as an excuse not to engage resolutely and in good faith in seeking a political solution,” the statement said.

It underlined that the Kingdom has taken proactive measures to promote and protect human rights on its entire territory. It cited, in particular, strengthening the independence of national human rights mechanisms and

Morocco’s growing openness to the UN special procedures, thus meeting the expectations of the international community and, in particular, the UN Security Council.

“In any event, the Kingdom, fortified by the strong consensus of all components of the Nation over the national unity and the territorial integrity, remains confident in the wisdom of the members of the Security Council and in their ability to find appropriate formulas to preserve the political process from any missteps that would have significant and detrimental consequences on the stability of the region,” the statement concluded.