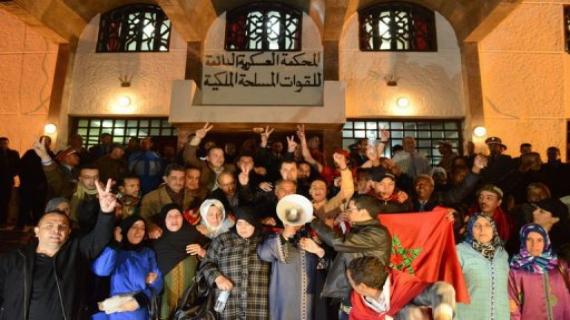 International, Moroccan observers confirm sentences are ‘just and in accordance with requirements of fairness and transparency’

A Moroccan military court on Sunday handed prison sentences, including life terms, to a group of individuals accused of killing members of the security forces in the Western Sahara in 2010.

Among the 24 defendants in court in Rabat, eight were jailed for life and four received 30-year prison terms, the MAP agency reported. Two of the accused who received the lightest sentences, two years in jail, have already served their terms in custody. A 25th defendant was tried in absentia and given a life sentence.

The CNDH report said that a delegation of the Board, attended the trial since it opened last Wednesday and issued preliminary observations, which touched mainly on the “heavy security around the court,” noting that “the role of the public forces is limited to the preservation of order and security, and access control to the court. ”  The report highlighted the public nature of the trial attended by families, observers, human rights activists, journalists, MPs, and diplomats. It also noted that the chairperson ensured that “the conditions of a fair trial were met.

All the hearings, including key decisions made by the court were explained and translated to Spanish, French, English and Hassani dialect, the same source said, adding that the presiding judge “has responded positively to a number of requests by the defense, including the summoning of witnesses, the presentation of evidence, and the projection of videos and photos.”

In the same context, the report said the hearings of the victims’ families were brief, deeming it as a process that is “appropriate and in accordance with the law” (particularly Article 96 of the Code of Military Justice), which gives them the right to launch a civil action as part of the current case.

International and Moroccan observers, who have followed the different stages of the trial, confirmed that the sentences are “just and in accordance with the requirements of fairness and transparency.” Some of the defendants had feared receiving the death sentence for the crimes of “forming criminal gangs, and violence against the security forces leading to deaths and the mutilation of corpses” in 2010, when authorities dismantled a camp where thousands of Sahrawis were living.

Authorities say 11 people died in the violence, among them members of the security forces, and 70 were wounded.  At dawn on November 8, 2010, Moroccan security forces moved to dismantle the Gdeim Izik camp near Laayoune, the main city in the disputed Western Sahara, which thousands of Sahrawis had set up in protest over their living conditions. The intervention sparked clashes that spread to Laayoune, where businesses and public buildings were looted and torched.

The Western Sahara issue is a highly sensitive subject in Morocco, which annexed the former Spanish colony in 1975.  Morocco has proposed broad autonomy for the territory under its sovereignty, but this is rejected by Polisario Front separatists who insist on the right of the Sahrawi people to a referendum on self-determination.

The military court handed down its sentences overnight Saturday after retiring to deliberate in the afternoon. Protests were held outside the court during the trial, though the scene was calm on Saturday night. After the verdicts were announced, some relatives of the dead security officers expressed their satisfaction at the court’s decision.