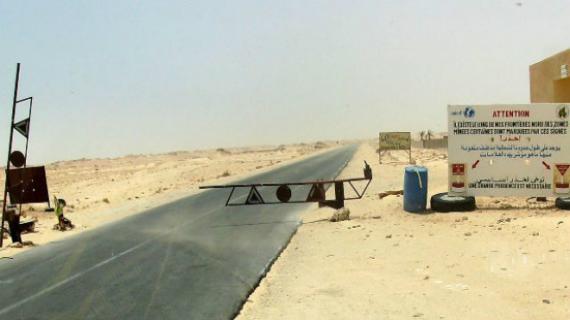 As expected, Morocco’s response to the recent provocations by Polisario militias in the Guergarate area came from the Moroccan army, which decided to transfer military bases to the area to cut off the way to the Polisario, reported Moroccan Arabic daily “Al Massae” in its Wednesday issue.

At a meeting held this week in Guelmim with senior officers stationed in the southern zone, Army General Bouchaïb Arroub, Inspector General of the Royal Armed Forces (FAR) and Commander of the Southern Zone, ordered the transfer of military barracks to the area of Guergarate, near the No Man’s Land, known as “Kandahar.” This demilitarized buffer zone is located at the extreme south-western tip of Morocco, on the border with Mauritania.

After the failure of his previous maneuvers, the Polisario leader Brahim Ghali recently took pictures with his militiamen on the Atlantic coast at Lagouira, a locality under the control of the Mauritanian army. To get there, Ghali and his men got the green light from Nouakchott.

The Polisario, ignoring the UN-sponsored ceasefire agreement concluded in 1991, is reportedly in talks with the authorities of Algiers and Nouakchott on the transfer of part of the Tindouf camps to Lagouira. According to Al Massae, the aim is to “populate” this city under Mauritanian control and to put Morocco before the fait accompli.

The Polisario’s new tactic reflects the disarray of its leader Brahim Ghali and his cronies because of their latest setbacks on the regional scene.

These setbacks include, among others, the arrest warrant issued against Ghali by the Spanish judiciary for “rape, torture and crimes against humanity”, the imminent return of Morocco to the African Union, and the gravity of the political, economic and institutional situation in Algeria, the Polisario’s main supporter. In addition to that, the Polisario is facing up the growing discontent of the Tindouf camps disenfranchised population who no longer believe in the bright future their leaders have been promising them for over forty years.

So far, the Royal Armed forces continue to show restraint in the face of this escalation, but surely not for long, if the Polisario does not stop its provocative acts.