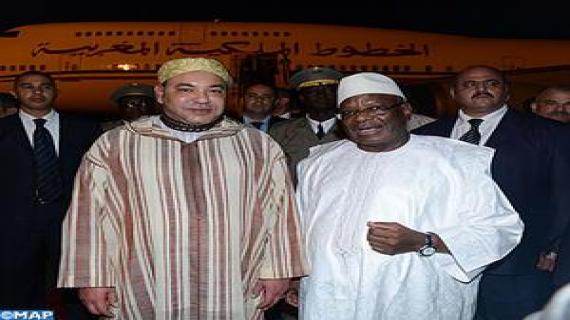 That support includes offering to train 500 Malian Imams using Morocco’s moderate and tolerant form of Islam to help fight the spread of extremism within their communities. Mali held successful presidential elections this past July after a year-long takeover of the northern part of the country by extremist groups.

“The dream of a peaceful Mali has now come true,” said King Mohammed VI, the only North African or Arab Head of State to join the ceremony.  “In this new chapter of Malian history which is being written today, Morocco will remain a faithful, committed partner.” The King said, “Both countries embrace the same values of tolerance and openness to others, and this represents the bedrock of the spiritual bond between our two countries.”

For the full text of the King's speech:

Your Excellency Mr. Ibrahim Boubacar Keïta, President of the Republic of Mali,

Distinguished Heads of State and Government,

My presence among you on this memorable day illustrates the Moroccan people’s friendship and their commitment to their unique relationship with the Malian people.

On this solemn occasion, I would like to extend, once again, my warmest congratulations to His Excellency Ibrahim BoubakarKeïta on his election as President of the Republic.

I wish you every success, Mr. President, in your endeavours to fulfil the legitimate aspirations of the people of Mali for peace, harmony and progress.

I would also like to take this opportunity to pay tribute to the Interim President, Mr.DioncoundaTraore, for wisely supervising the sensitive transition period.

In this respect, I wish to commend the efforts exerted by the Heads of State and Government of ECOWAS Member Countries and of Chad, alongside those of the Republic of Mali, our sister nation, during the painful ordeal this country recently went through.

I also wish to reiterate my thanks to the President of the French Republic, Mr François Hollande, for his country’s open and crucial support, and for France’s dynamic, bold diplomacy, both of which have contributed to the achievement of peace and stability in Mali.

Despite difficulties that were once deemed insuperable, Mali managed to hold credible, transparent presidential elections, upholding the country’s sovereignty, stability and unity.

This success was undoubtedly the most pertinent response to the erring of radical and extremist groups of all kinds, everywhere else in the world.

As we pride ourselves on this collective victory over obscurantist and separatist forces in Mali, we all remain aware of the magnitude of the challenges that must be faced during this new phase of national reconciliation and reconstruction:

-    A peaceful reconciliation between all Malians, open to all political trends. The creation of a specific "Department for National Reconciliation and Development of the Northern Region" constitutes a solid, promising basis for the achievement of reconciliation;

-    Sustainable reconstruction through the consolidation of political, representative and security institutions, the revamping of development institutions and infrastructure and, finally, the reorganization of the religious domain.

All of this is to be carried out while fully upholding the sovereignty and the free choice of Malians.

The noteworthy presence of Mali's friends in Bamako today clearly shows you can rely on their shared commitment to continuing to support you for the achievement of your mission – a mission which is as difficult as it is exhilarating.

The international community will remain at your side to lay the ground for a new political and territorial governance system that suits your country’s geographical, economic and cultural characteristics.

Mali’s unique cultural features have always constituted a major component of the Islamic heritage and of the African identity.

Any concerted international action that does not give due consideration to the spiritual and cultural dimension will therefore be doomed to failure. The partnership the Kingdom of Morocco wishes to propose for the tangible and intangible reconstruction of Mali is fully in line with this philosophy.

It is absolutely necessary to repair the material damage suffered and to treat symbolic wounds through the rehabilitation of mausoleums, the restoration and preservation of manuscripts and the achievement of socio-cultural revival.

Islamic customs and practices in Morocco and Mali are the same. They are nurtured by the same precepts of moderation and of the “middle-of-the-road” approach. Both countries embrace the same values of tolerance and openness to others, and this represents the bedrock of the spiritual bond between our two countries.

Guided by this common set of spiritual values and aware of the need to safeguard those values against all risks and perils, I am pleased that we will be signing an agreement for the training, in Morocco over the next few years, of 500 Malian Imams.

This two-year training course will be mainly devoted to the study of the Maliki rite and of the moral doctrine that rejects any form of excommunication.

As a fervent advocate of South-South cooperation, Morocco will spare no effort to support Mali - our sister nation and neighbor - in the socioeconomic sectors which you deem a priority for the country. It will support Malian human development programs, particularly in the areas of executive training, basic infrastructure and health.

In this respect, the Kingdom of Morocco has recently set up a multi-disciplinary military field hospital in Bamako, which is supported by medical and humanitarian emergency assistance.

Our cooperation will encourage the business community in both countries to become more actively involved in promoting trade and investment between our two nations, thus boosting employment and encouraging the transfer of skills and capital.

All African sister nations have a vital role to play in this important reconstruction mission.

Unfortunately, and in spite of the stakes involved, certain states and parties seek to demolish where others choose to build.

It is in keeping with a long-established, immutable tradition of cooperation with sub-Saharan sister nations that Morocco intends to shoulder its historical responsibility in this regard.

I have personally been devoting special attention to this key element of Morocco’s external relations, seeking to reinforce it as much as possible.

A founding member of the Organization of African Unity, Morocco is not a member of the African Union. Yet, it has sought, in a fully autonomous way and more than ever before, to launch tangible initiatives and efficiently carry out concrete projects. Today, significant results have been achieved, and Morocco intends to build onthese achievements by carrying on with its untiring efforts to promote solidarity with sister nations.

The dream of a peaceful Mali has now come true. In this new chapter of Malian history which is being written today, Morocco will remain a faithful, committed partner.