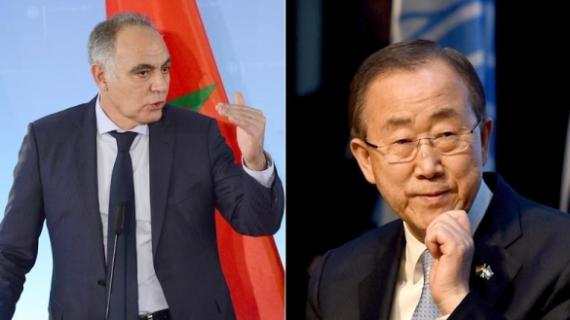 Morocco is “at odds with UN Secretary General Ban Ki-moon, not with the United Nations”, Foreign Minister Salaheddine Mezouar stressed at a press conference, held Thursday in New York.

“Faced with the repeated blunders of Ban Ki-moon, during his last visit to the region, and his acts that are incompatible with the responsibilities and the mission of the Secretary General that compel him to the duty of equidistance and objectivity, there was a logical and natural reaction from the Moroccan government that has strongly protested against his excesses”, Mezouar told international press accredited in New York.

“Worse, Ban Ki-moon also seeks to drive the situation towards a confrontation between Morocco and the United Nations to justify the unjustifiable”, the minister lamented at the press conference aimed to inform international public opinion.

Faced with this unprecedented situation in the annals of the United Nations and the UN Secretary General, the Moroccan parliament convened an extraordinary session, he recalled, adding that in this same spirit, no less than 3 million Moroccan citizens took part in peaceful demonstrations against the “unacceptable” statements of the UN SG.

Mezouar also that following these developments, “I asked, upon High Instructions of HM the King, for a meeting with the UN Secretary General, whom I actually met last Monday to inform him about the strong condemnation of the Moroccan government of his acts and to ask clarifications on his excesses and his outrageous comments which hurt the feelings of the whole Moroccan people”.

“I have, in this regard, contacted the majority of the Security Council countries to inform them of these abuses”, the minister added.

Mezouar also took the international community and the members of the Security Council as witnesses of the nonsense and unjustified acts of Ban, adding that Morocco, after noting the obstinacy of the UNSG who refused to apologize and notably withdraw the term “occupation” that he used to describe the recovery by Morocco of its territorial integrity, the kingdom responded through “two critical decisions with immediate effect.”

He cited, in this regard, “a significant reduction in the coming days, of a large part of the civilian component and particularly the MINURSO political segment”, saying that a list was sent Wednesday to the UN General secretariat.

The second decision, the minister added, concerns “the cancellation of the voluntary contribution granted by Morocco for the maintenance of MINURSO, which amounts to $ 3 million”.

“The withdrawal of the Moroccan contingents engaged in peacekeeping operations was also being examined”, he recalled, announcing that “following the interventions of the Security Council members and countries where Moroccan forces are stationed, which unanimously hailed the Moroccan troops and their professionalism, Morocco decided to suspend this decision and respect these positive reactions. “

It is not acceptable, the minister said, that the UN Secretary General makes people believe that Morocco has shown disrespect to the United Nations as an institution.

The Minister reiterated Morocco’s continued commitment to the United Nations and the supreme sacrifice of the Moroccan soldiers who died under the UN banner to defend the ideals of the Charter.

Mezouar also underlined that the UNSG visit to Morocco is out of question “following the press release he issued after Monday’s meeting and since Ban Ki moon has not undertaken any action that promotes appeasement”.

“In conclusion, the Secretary General tries to present himself as a victim, while he is the only responsible for the exacerbation of a situation which was calm in the region”, he stressed.

The hazardous statements and irresponsible acts of the the UN Secretary General have only fueled the tension in this part of the world, which did not need it, the minister lamented.