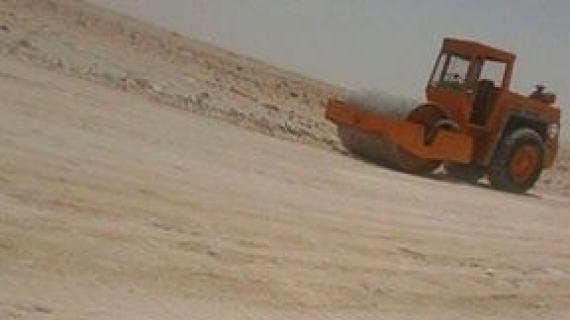 Following a successful anti-smuggling operation to clear the border area of Guerguerat from all sorts of illegal commercial activities, Morocco completed the asphalting of the Guergarat road as part of a security measure.

A government source told the le360.ma that the asphalting works of the road to Guergarat in beyond the security wall in the buffer zone were achieved with a view to safeguarding the supreme interest of the Kingdom and protecting its borders by barring the road to trafficking networks, which turned that border area into a venue for engaging in all sorts of illegal commercial activities.

The asphalting of the road took place in a context marked by the “fog of war”, as the Polisario separatists sent armed fighters to the buffer strip in the Guergarat area, in a failed attempt to halt the works.

Polisario fighters in a blunt violation of the 1991 UN-brokered cease-fire came 120 meters close to Moroccan army positions behind the wall, pushing to UN to express concerns over a real risk of a full-blown war between the two parties.

“The situation remains tense in the Guergarat area” said the UN Spokesman Stephane Dujarric, adding that “any resumption of hostilities, with the potential to have wider regional implications, remains of significant concern to the UN.”

The UN is “actively engaging with the parties and key member states to urge restraint and identify options for an acceptable solution to the current crisis,” Dujarric said.

In a desperate attempt to portray the buffer strip as a “liberated area”, the Polisario protested against the security operation launched by the Moroccan police and customs authorities in mid-August against smugglers who turned the area beyond the berm of Guergarat into a venue for engaging in all sorts of illegal cross-border commercial activities.

Morocco’s crackdown on smugglers came after reports of a potential trafficking by separatists of an arms cargo into the southern provinces where they intended to undermine public order. Hence the fury of the Polisario leaders who have been accused by several international reports of connivance with trafficking networks and terrorist organizations in the region as well as embezzling humanitarian aid.

Earlier in August, the UN mission to the Sahara, MINURSO, has refuted the Polisario’s failed attempt to portray Morocco’s security operation as a breach of the ceasefire saying that the anti-smuggling operation in Guergarat had a police character and was undertaken in coordination with the UN.