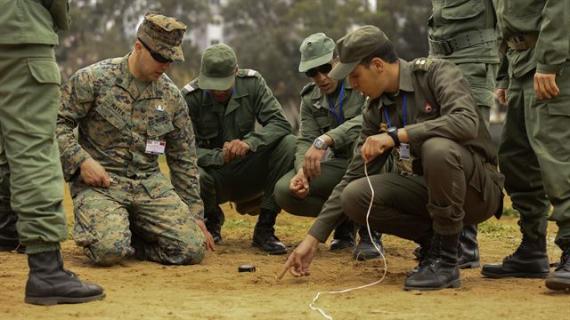 According to a story published in today’s edition of Moroccan paper Assabah, the Moroccan authorities will deploy in the upcoming days a special highly qualified unit belonging to Morocco’s Royal Military Armed Forces (well-known under its French acronym FAR) near the Moroccan defensive wall in the Sahara to remove landmines.

According to the Moroccan paper, these units have just completed a training provided by the US Marines.

The paper said that landmines still constitute a huge danger for the life of humans and animals that live in the Sahara region, the part that witnessed a conflict a couple of years ago with the Polisario front.

The paper said that in the last years, many Moroccans were injured after the detonation of some of the explosive devices, designed to be detonated by the presence, proximity or contact of a person or animal.

Animals are also suffering from those landmines as the region witnessed the death of a myriad of them, especially camels, and in some cases feral native species like Fencec foxes.

Landmines, as a matter of fact, are designed to be placed under or on the ground, and can lie dormant for years and even decades until a person or animal triggers their detonating mechanism.

The newspaper said that the Moroccan special team that will be tasked with the “difficult job” has been trained in Kenitra by US Marines.

The operation is expected to kick off next month, April.