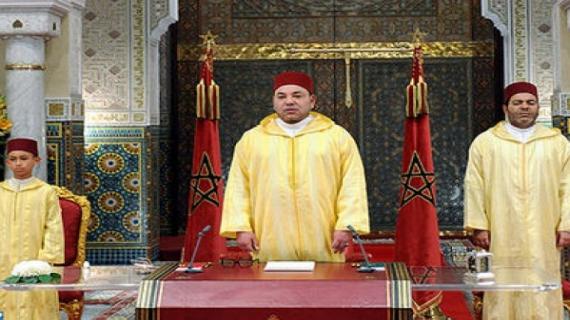 During his speech on the occasion of the 38th anniversary of the Green March, King Mohammed VI of Morocco slammed international criticism of Morocco’s human rights record in the Sahara insisting the kingdom needed no lessons from anybody.

Morocco is committed to positive and interactive cooperation with international human rights bodies which are unbiased in dealing with issues and accept constructive criticism. However, Morocco refuses that some organizations, in reports written beforehand, use some isolated incidents to attempt to undermine its image or trivialize its human rights and development achievements, the King stressed.

Morocco would not accept  be lectured on human rights, “particularly by those who systematically trample on human rights,” he said, in a clear allusion to Algerian President Abdelaziz Bouteflika who sparked angry protests in the kingdom’s economic capital Casablanca last week with a speech hitting out at its policies in the Sahara.

”Anybody who takes issue with Morocco only has to go down to Tindouf and  check the numerous human rights violations in the surrounding area,” the King added.

In a speech in the Nigerian capital Abuja last week, Bouteflika hit out at the “massive and systematic human rights violations that take place inside the occupied territories to suppress the peaceful struggle” of the Sahrawi people for independence. He said international monitoring of the human rights situation was needed “now more than ever.”

During his anticipated speech, which came in the context of deteriorating relations with Algeria, the king made veiled criticism of the US move to monitor human rights in the Sahara. Last April, after the lobbying efforts made by the RFK Center of Human Rights headed by Kerry Kennedy, known for her bias towards the Polisario, the US proposed a draft resolution to the Security Council calling for the establishment of a human rights monitoring mechanism in the Sahara. The draft was eventually amended and call for the establishment of such mechanism was included in the final resolution.

“Is there a crisis of confidence between Morocco and certain decision-makers in its strategic partners on the human rights issue,” he asked.

King Mohammed VI promised Morocco’s “cooperation with the UN chief, his envoy and friendly countries” in their efforts to “find a definitive political solution  to the conflict.”

“Our goal is finding a final political solution to the artificial conflict over our territorial integrity, within the framework of our autonomy initiative which has been recognized for its seriousness, credibility and realistic spirit,” he added.