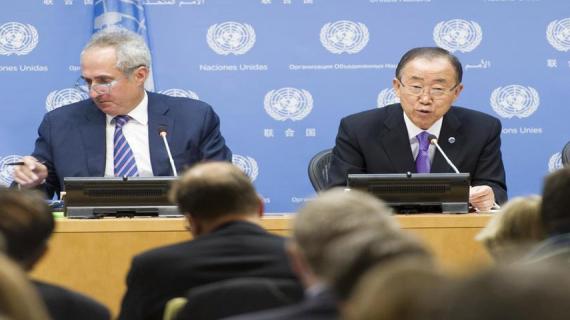 Reuters: Morocco said on Tuesday that U.N. Secretary-General Ban Ki-moon's description of its annexation of Western Sahara as an "occupation" was not a misunderstanding but a "premeditated act to alter the nature of the dispute".

The foreign ministry statement came a day after a U.N. spokesman said Ban regretted the "misunderstanding" over his use of the word, which led to Morocco expelling dozens of United Nations staff from its mission in the disputed territory.

The standoff over Ban's comment is Morocco's worst disagreement with the United Nations since 1991, when the U.N. brokered a ceasefire to end a war over Western Sahara and established a peacekeeping mission there known as MINURSO.

"In the eyes of Morocco, these are premeditated acts to alter the nature of the dispute," Morocco's foreign ministry said in a statement. "At this level of responsibility, words have meaning, political and legal consequences, and personal opinions have no place."

Morocco took over most of the territory in 1975 from colonial Spain. That started a guerrilla war with the Sahrawi people's Polisario Front, which says the desert territory in the northwest of Africa belongs to it.

The United Nations brokered a ceasefire in 1991 and sent in its MINURSO mission to help organize a referendum on the future of the territory. But the sides have been deadlocked since then.

Morocco, which accused Ban of losing his neutrality in the dispute, said it also had differences with the U.N. chief over his reference to the referendum during his visit to the Western Saharan refugee camps in Tindouf in southern Algeria.

Morocco also criticized Ban for visiting Bir Lahlou town, which it considers part of the buffer zone with the Polisario front. It said he had also signaled acknowledgement of the flag of the Polisario's self-declared Arab Sahrawi Republic (SADR).

SADR has been recognized by some countries, mainly from the African Union, but no Western powers recognize it.

Since the dispute erupted earlier this month, U.N. officials have repeatedly urged the U.N. Security Council to publicly voice its support for Ban and MINURSO, which the 15-nation body did late last Thursday in New York.

But the council has not explicitly ordered Morocco to reverse its decisions or address Ban's use of the word "occupation." Some U.N. diplomats blamed the council's silence on Morocco's ally France, along with Spain, Egypt and Senegal.

Algeria, Polisario's biggest ally and Morocco's regional rival, said on Tuesday the dispute was the main area of disagreement with France in foreign policy.

"We keep good hope that France will help the region to resolve this Sahrawi question according to international law," Algerian Foreign Minister Ramtane Lamamra said in a joint conference with French counterpart Jean-Marc Ayrault in Algiers.

Morocco says that it will keep supporting the military part of MINURSO and that contacts with the ceasefire-monitoring units have not been disrupted.

Polisario wants to hold the vote promised in the ceasefire deal on the region's fate, while Morocco says it will not offer more than autonomy for the region, rich in phosphates and possibly offshore oil and gas.