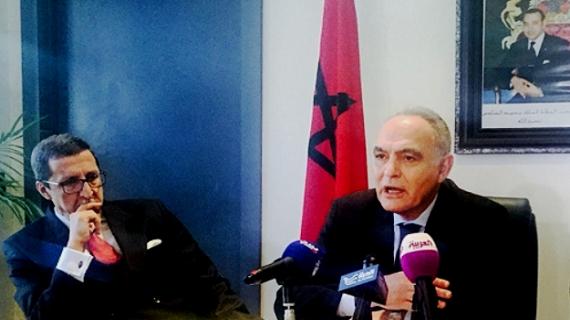 The Minister of Foreign Affairs and Cooperation, Mr. Salaheddine Mezouar, held, on Thursday, March 17th 2016, in New York, a press conference, attended by representatives of media an international press accredited to New York, with the aim of informing the international public opinion about the deviations of the UN Secretary General, during his last visit to the region.

During this meeting, Mr. Mezouar emphasized that the Kingdom of Morocco disagrees with the UN Secretary-General Mr. Ban Ki-moon, and not with the United Nations.

Furthermore, the Minister  indicated that the due to the  repeated deviations of Mr. Ban Ki-moon and his actions,  incompatible with the obligations and mission of the Secretary General which require of him a duty of equidistance and objectivity, there was a logical and natural response from the Government of Morocco which strongly protested against his deviations.

Mr. Mezouar was also indignant at the fact that UN Secretary General seeks to orient the international public opinion and the Security Council members, on the basis of his personal affect, underlining that the UN Secretary General has not to express his personal reactions, due to the nature of his role. to describe the recovery by Morocco of its territorial integrity, the Kingdom responded by "two main decisions with immediate effect."

He mentioned, in this respect, the significant reduction of a big part of the civilian component, particularly the political segment of MINURSO, and the cancellation of the voluntary contribution granted by Morocco to the functioning of MINURSO, which is about $3 million.

Regarding the withdrawal of Moroccan troops involved in peacekeeping operations, Mr. Mezouar said that this measure was subject to examination, clarifying that "following the intervention of Security Council members and the countries where Moroccan forces are based, who unanimously welcomed the Moroccan troops and their great professionalism, Morocco has decided to suspend, at this stage, this decision and to respect these positive reactions."

The Minister emphasized that it is not acceptable that UN Secretary General makes believe that Morocco has shown disrespect for the United Nations, as an Institution, reminding, in this regard, Morocco’s constant commitment in favor of the United Nations and the high sacrifices made by the Moroccan soldiers who died under UN flag, defending the ideals of the Charter.

Furthermore, Mr. Mezouar, said that the visit of UN Secretary General to Morocco is not a topical issue "given the statement which he issued after Monday's meeting and since Ban Ki moon has not undertaken any action for appeasement."

The Minister stated also that the Secretary General is trying to present himself as a victim, while he is solely responsible for the exacerbation of the situation was calm in the region, regretting that the dangerous remarks and irresponsible actions of the UN Secretary General have but fueled the tension in this part of the world, uncalled for.