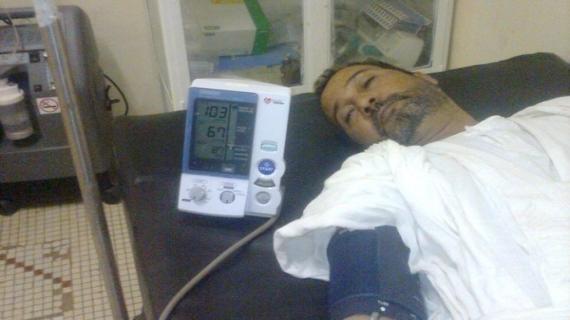 In an interview with the Moroccan channel Medi1 TV on Wednesday, Mustapha Salma Ould Sidi Mouloud, called on the United Nations and the international community to stop “encouraging Polisario’s human rights abuses against dissenting voices in the Tindouf camps.

“I have been on a hunger strike for ten days now,” Mustapha Mouloud told Moroccan

channel MEDI1 in an on-air testimony. “The weather here is also harsh, with high temperatures and strong winds,” he added, describing his critical condition while on a hunger strike.

Mustapha Mouloud also expressed his disappointment to MEDI1, for his endeavors seemed to lead to a deadlock: “What makes my hunger strike even more unbearable is the fact that everyone has turned deaf ears to me and have not cared about my critical condition,” stated a frustrated Mouloud.

Asked about a message he would like to send out to the U.N and international human right entities, Mustapha Mouloud stated, “I urge all international institutions to stop being silent, because by doing so, they only give an encouraging green light to the Polisario to continue with its violations of human rights in the Sahara.”

In a universal tone, Mustapha Mouloud culminated his message by shedding light on the humanistic dimension of his case: “I am a representative of the Sahrawi people, and I have been stripped from all basic rights, so every international entity concerned with human rights in general, and in the Sahara in particular, should by definition be concerned with my case here,” stated Mouloud.

A demonstration took place last Tuesday before the headquarters of the UN’s High Commission for Refugees (HCR) in Rabat in solidarity with the Sahrawi activist Mustapha Salma Ould Sidi Mouloud.

The demonstration was organized in solidarity with Mustapha Salma who has been on a hunger strike since May 20 in Nouakchott, where he was exiled by the Polisario Front, and prohibited from returning to his homeland and family.

The participants in the sit-in, representing a number of non-governmental institutions, held banners calling for the return of Mustapha Mouloud to his family in the Tindouf camps after the ban imposed by the Polisario.