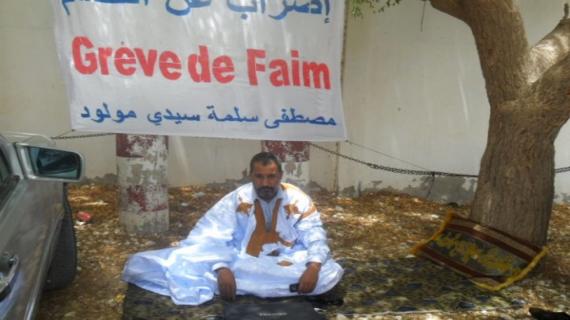 Declared Sahrawi activist Mustapha Salma Ould Sidi Mouloud, exiled since more than two and a half from the Tindouf camps in Algeria to Mauritania, it will enter into an open hunger strike in front of a representative of the High Commissioner for Refugee Aid in the capital Nouakchott starting on May 20 this until the settlement of the nines.

Mustafa said Salamah, in a statement issued on Sunday, he made the decision after it has exhausted all means of Salutation legal with the concerned parties to settle the nines, at the level of bodies of the Office of Refugee Aid, and the powers of the Mauritanian state, since the face of the earth Mauritania on 30 November 2010, noting that did not reach positive response on his right and the right of his family in the meeting, in normal circumstances, the right to obtain a passport.

The decision comes, according to the statement, "waiting to meet the Office of Refugee Aid commitment to finding a solution Willem included my family that wrote them parting since more than two years and a half, after stop me from returning to my children in the Sahrawi refugee camps on the Algerian territory and نفيي to Mauritania" .

And carry Mustafa Salamah stakeholders that forced him to take this position "because of procrastination in the search for a solution and ignored the situation is the humanitarian I live and suffer sons of consequences, responsibility for what may entail him of negative repercussions", appealing to people of conscience in the world support the right of his family to meet him and the right to mobility.

Mr. Mustapha Salma Ould Sidi Mouloud was kidnapped on 21 September 2010 by the militias "Polisario" upon arrival at the border checkpoint leading to the Tindouf camps, which gave them from the dust of Mauritania and held in a secret location, after the cross, during his visit to Morocco, "expressed support frank "of the Moroccan proposal aimed at resolving the conflict in the Sahara on the basis of autonomy under Moroccan sovereignty.

Was released this desert fighter, who served as the former Inspector General of the police, "Polisario", at the end of 2010 was handed over to the Office of the High Commissioner for Refugee Aid, Mauritania, after an international campaign and extensive release.