بعد 18Peru has deported khadijetou El Mokhtar Sidhmed, a Polisario representative who had been staying in Lima’s Jorge Chavez Airport for almost 20 days after she was denied entry to the country, Peruvian online media outlet La Mula reported.

Despite continuous pressures by pro-Polisario politicians and organizations, Peruvian authorities stuck to their decision to refuse El Mokhtar, returning her to Spain.

In a statement issued on Wednesday, the Peruvian Ministry of Foreign Affairs said that she had been “prevented from entering Peru because she had violated her migratory status as a tourist during her recent stay in our country.”

The release referred to El Mokhtar as a “Spanish citizen,” as she had come to Peru from Spain, using a Spanish passport.

Her lawyer told AFP that her deportation to Spain was “the only solution” as she had not been allowed into Peruvian soil.

The Polisario representative was sent to Peru on September 9 as an “ambassador” to the country, even though Lima does not officially recognize the self-proclaimed Sahrawi Arab Democratic Republic (SADR).

In recent months, pro-Polisario media had been claiming that relations between SADR and Peru were reestablished during a meeting between Polisario chief Brahim Ghali and the President of Peru, Pedro Pablo Kuczynski, during the swearing-in of Ecuadorian President Lenin Moreno in May.

However, El Mokhtar’s appear to belie this claim, as a few weeks prior to her September trip to Peru, the representative had entered the country with a tourist visa and Spanish passport.

Even though she had not come to Peru as a recognized diplomat, she actively tried to garner support for Polisario, attending a parliamentary meeting to advocate for the separatist organization. El Mokhtar was kicked out of the meeting after a number of MPs asked her to leave.

When she returned this time to Peru, again with a Spanish passport, she was arrested by policemen at the airport. Despite attempts by her lawyer and pro-Polisario groups to overturn the arrest, local authorities refused to allow her in.

The Polisario representative reportedly went on a hunger strike and rejected her deportation order in a desperate attempt to put pressure on Peruvian officials, but to no avail.

The Peruvian Ministry of Foreign Affairs assured that El Mokhtar’s rights were “respected” throughout her detention in Jorge Chavez airport and that assistance was provided to her by immigration authorities.

As her presence was a violation of migration rules, her “immediate return” to Spain complied with the country’s “migration norms,” explained the ministry.

Along with El Mokhtar’s deportation, Lima dealt another strong blow to Polisario. The Ministry of Foreign Affairs’ statement declared that Peru has no intention to recognize SADR.

“The Peruvian Government is not considering restoring diplomatic relations with SADR,” said the statement.

“It should be noted that diplomatic relations with the [SADR] have been suspended since 1996, so the Peruvian Government does not recognize the official exercise of representation and diplomatic efforts of SADR delegates in our country.” 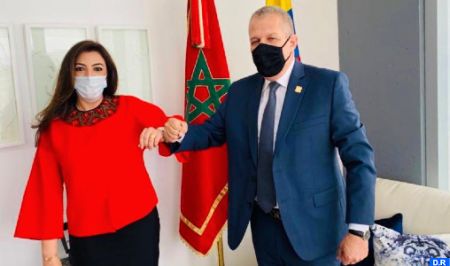