The Polisario in collusion with the kidnappers of Spanish hostages 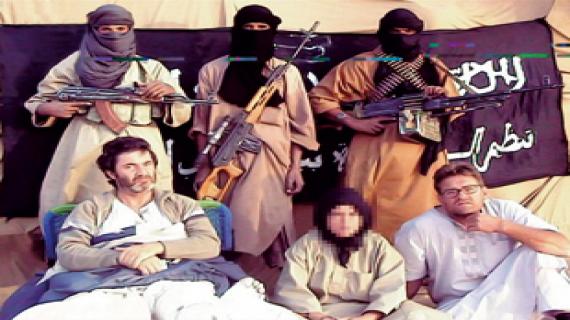 While some still have doubts about the complicity of the Polisario armed militia with off-the-law of any edge that roam freely in the vast desert of the Sahel, a Mauritanian military just to prove their involvement.

Armed to teeth but empty pockets because they are poorly paid, the Polisario elements have found a way to make some money by making them useful for the removal of Western tourists by the men of Al-Qaeda in the Islamic Maghreb (AQIM .)

These multitudes of no man's land dotted around the vast desert shared by including Mauritania, Algeria, Mali and Niger, offer these small groups, an ideal place to practice their manhunt and operate kidnapping ransoms consistent reporting them.

One of these no man's land controlled north-east of Mauritania by the Polisario armed militia, recently served as land exchange. The victims are three aid of the Spanish NGO Barcelona Accion Solidaria kidnapped Nov. 29, 2009, near Nouadhibou by masked captors.

The Commander of the Second Special Intervention Group (SMG - Mobile Unit that travels through the closed points in the former no man's land), reportedly told a French television channel, that armed Polisario elements have facilitated the transit and delivery hostages to AQIM jihadists in mass exchange dollar bills.

If these kidnappers, he argued, had not received some foreign complicity, including a foreign territory, they n 'could not have as easily remove the Spanish in this way and take them directly in northern Mali.

Apart Alicia Gamez, 35, who was released on March 10, the other two hostages, Albert Vilalta and Roque Pascual, would be between hands of the Emir of VI Al Qaeda in the Maghreb, Mokhtar Benmokhtar aka Laaouar (the blind). Of negotiations on the ransom demands of AQIM are conducted discreetly by an intermediary on behalf of the Spanish authorities.