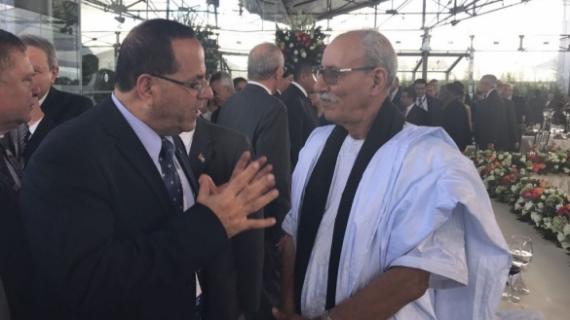 Brahim Ghali, the leader of the Polisario Front, has been pictured in conversation with an Israeli minister.

The Times of Israel’s French edition reported that the Israeli Minister of Communications, Ayoub Kara, met with Ghali on Wednesday in Ecuador during the the investiture ceremony of Ecuadorian president Lenin Moreno.

The Likud party minister was photographed talking to the president of the self-proclaimed Sahrawi Arab Democratic Republic (RASD).

The picture stands in total contrast with the Polisario’s claims of being pro-Palestinians.

The separatist group, along with Algeria, its main sponsor and ally, has long proclaimed themselves as supporting Palestine.

Algerian pro-state media have constantly accused Morocco of establishing links with Israel even though the Rabat cut diplomatic relations with Tel Aviv in 2000 during the second Intifada.

Polisario has long sought to instrumentalize the Palestinian cause by using a similar flag and presenting itself as a “liberation movement.”