The Polisario of MUJAO Abu Walid Sahraoui, claiming the attacks of Niger 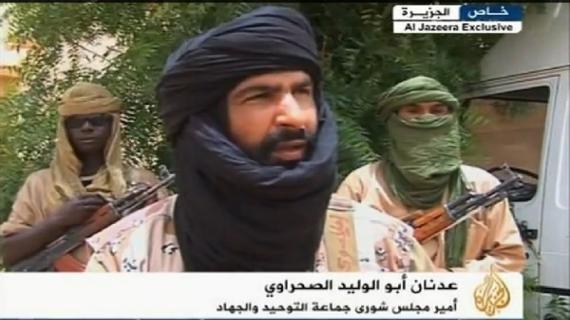 The spokesman for the Movement for the uniqueness and jihad in West Africa (Mujao) Sahelian jihadist group with elements of the Polisario in its ranks, claimed today Thursday, May 23, double attack in Niger against the country's military instalations and the French Areva group. Double attenta with at least 23 killed, including 18 soldiers.

"We attacked France and Niger for its cooperation with France in the war against sharia," said the Polisario militia and part of MUJAO, threatening further action.

"We will continue attacks against France and all countries that are with France against Islam in the war of northern Mali," he said.

Niger is engaged in the African force deployed to Mali after the offensive launched in January by the French army against armed Islamist groups linked to Al-Qaeda, whose Mujao.

Note that 18 Nigerian soldiers and a civilian were killed in the attack against a military camp in Agadez in northern Niger, where four suicide bombers are dead, and cadets are being held hostage by one of the attackers, announced the Nigerian government.

"In Agadez, we have 19 people, 18 soldiers and one civilian," said at a press conference in Niamey, the Interior Minister Abdou Labo.

"Four suicide bombers died in the explosion," he said, making also state "13 wounded, six seriously" in the ranks of the army.

"A fifth bomber was locked in a room with hostages cadets' training in Agadez, he added.

"The measures are taken to stop the bomber and release cadets," assured the minister.

Another car bomb aimed at almost the same time a French group Areva uranium site at Arlit (more than 200 km north of Agadez).

One of them is a "civil", "injured 49 others are all agents of the defense forces and security," he detailed.

Areva his tee Cô reported 13 wounded among its Nigerian workers.

"The situation is under controlled research and the other attackers are ongoing," said Defense Minister Mahamadou Karidjo told reporters in Niamey.

Translated by:  Polisario: Threat in the Desert