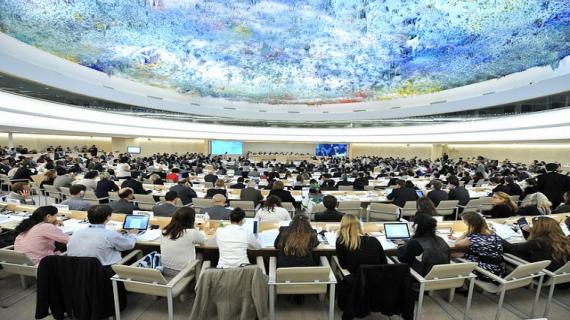 International NGOs have denounced the crimes and abuses committed by the Polisario leaders in the Tindouf camps before the UN Human Rights Council (UNHRC ) meeting in Geneva this week.

Stress was laid on the violations and abuses perpetrated with impunity against Sahrawi women and children.

Representatives of the Agency for International Development (AID) took the floor during a plenary session to alert the UNHRC about the sufferings endured for years by the Tindouf camps population in general and women in particular.

“We are here today to denounce the violations of most basic human rights of women and girls who have suffered and still suffer of all kinds of harassment, rape and forced marriage,” said lawyer Agustin Fernandez de la Cruz, an AID member. He urged the UNHRC to pressure Algerian authorities and Polisario leaders to stop these abuses.

One of the victims of these violations, Khadijatou Mohmud Mohamed Zubair, 24, who was accompanying Lawyer Agustin Fernandez, said that she had been kidnapped in 2010 in Algiers and that when she was 14, she had been brutally raped by Brahim Ghali, the current Polisario representative in Algiers.

Brahim Ghali, along 27 other Algerian and Polisario officials, is summoned to appear before the Spanish National Court on charges of “genocide, murder, injury, illegal detention, terrorism, torture and enforced disappearances.”

The Mauritanian NGO “Memory and Justice” on its part pleaded the cause of hundreds of Mauritanians who were reported missing, murdered or arbitrarily detained in Polisario jails.

This NGO called for the setting up of an international investigation commission to probe the crimes committed in Tindouf and to bring before justice “torturers tainted with the killing of innocent victims.”

On behalf of AID, Swedish activist Alhir Kodra has also requested the UNHRC to set up a mechanism of control and monitoring of the humanitarian assistance destined to the Tindouf camps populations to avoid that this assistance is “embezzled by the Polisario nomenklatura.”